The respiratory system is the network of organs and tissues that help you breathe, It helps your body absorb oxygen from the air so your organs can work, It cleans waste gases, such as carbon dioxide, from your blood, It includes your airways, lungs, and blood vessels, It suffers from common problems include allergies, diseases or infections.

Respiratory portion of the lung includes the following parts: 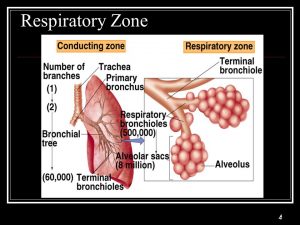 It consists of 2 types of alveolar cells lining the alveolar surface:

a- Type I pneumocytes:

It the thin connective tissue layer that surrounds and separates the alveoli from one another. It is traversed by the alveolar pores that allow collateral respiration if a small airway passage becomes obstructed.

Clinical hint: In heart failure, the alveolar macrophages phagocytose RBCs which are extravasated into the alveoli from the congested pulmonary capillaries. Here the macrophages contain hemosiderin pigment granules inside their cytoplasm and are known as heart failure cells.

It is the thin portion of the interalveolar septum, where air the alveoli is separated from capillary blood by:

During intrauterine life, the lungs have no function. Histologically, the fetal lung has the following features: