The immune system protects an organism from diseases, It can detect and respond to a wide variety of pathogens, from viruses to parasitic worms, as well as cancer cells, The immune system can protect your child’s body from outside invaders, These include germs such as bacteria, viruses, and fungi, and toxins (chemicals made by microbes), The immune system consists of organs, cells, and proteins that work together.

Cells of the immune system

The myeloid progenitor gives rise to erythrocytes, platelets, basophils, mast cells, and eosinophils. neutrophils, monocytes, macrophages, and dendritic cells, Immunity signifies all those properties of the host that confer resistance to an infectious agent. 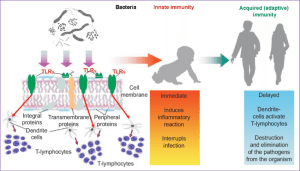 Few microorganisms can penetrate body surfaces. These surfaces have an epithelial cell layer as their barrier, which is present in the skin, airways, gastrointestinal tract, and genitourinary tract. The epithelial cell layer has tight junctions and produces a number of antimicrobial peptides that help provide protection against invading pathogens. For example, lysozyme and defensins.

The mucous epithelium of the respiratory tract offers another mode of protection from infection, The sticky mucous secretion covering the mucous membrane of the respiratory tract, acts as a trapping mechanism, and the action of cilia sweeps the secretion with inhaled microorganisms, either to the outside through coughing or sneezing, or towards the stomach where they are acted upon by HCl.

The gastrointestinal tract also has mechanisms to inhibit bacteria produced by the acidity of the stomach and the proteolytic enzymes of the small intestine, An additional barrier to microbial invasion is the effect of the chemical environment, For example, the presence of an acidic pH in sweat and sebaceous secretions, Moreover, the production of fatty acids on the skin also eliminates pathogenic organisms.

They are a group of pattern recognition receptors found either on the surface or in the endosomal compartment of many immune cells,  They are glycoprotein in nature and are an important part of innate immunity. They recognize and bind to highly conserved structures present in different organisms known as pathogen-associated molecular patterns (PAMPs).

The cell surface TLRs typically sense PAMPS of microbial cell envelopes, flagella or lipopolysaccharide, whereas those in the endosomal compartment bind nucleic acids.

Binding of TLRS to PAMPS of bacteria and fungi triggers the activation of signal transduction pathways resulting in the activation of innate immune cells and synthesis of cytokines as IL-2, IL-8 and TNF-α, that in turn triggers immune defenses as inflammation, fever and phagocytosis. While binding of TLRs to viral components triggers synthesis of interferon and blocks viral replication.

They are a specialized set of intracellular cytosolic receptors that are essential components of the innate immune system and function by the recognition of cytoplasmic PAMPS resulting in the activation of signaling pathways. This results in the production of cytokines and chemokines which alert the immune system to the presence of pathogenic bacteria and aid in the clearance of infection.

Phagocytosis is enhanced by the opsonization of the particles by opsonins, which include complement fragments (C3b) & Immunoglobulins,

Injury to tissue initiates an inflammatory response that limits the spread of organisms. This response is mediated mainly by cytokines which may include inflammatory and anti-inflammatory cytokines, chemokines, adhesion molecules, and growth factors.

The complement system is another key component of innate immunity, The alternative and lectin pathways serve as critical first lines of defense and provide immediate protection against microorganisms.

These NK cells recognize cells that fail to express MHC class I molecules. They can also bind to antibodies already attached to antigens on a target cell using their Fc receptors. i.e. a process known as antibody-dependent cell-mediated cytotoxicity (ADCC), They are naturally present in the spleen and peripheral blood (about 5-10% of peripheral blood mononuclear cells).