The pituitary gland controls several other hormone glands in your body, including the thyroid & adrenals, the ovaries & testicles, so it is called the master gland, It is a protrusion off the bottom of the hypothalamus at the base of the brain, the pituitary gland is attached to the base of your brain by a thin stalk. It is about the size of a pea, It is situated in a bony hollow, just behind the bridge of your nose.

The pituitary gland is a small ovoid body that is lodged in the hypophyseal fossa (sella turcica) of the sphenoid bone. It is connected to the tuber cinereum of the brain by a hollow conical stalk called the infundibulum. It is roofed by the diaphragm sellae. 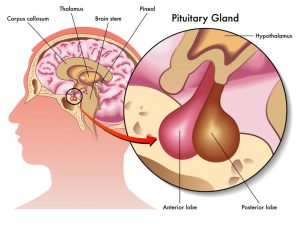 The pituitary gland is divided into:

It is the darkly stained cellular part of the pituitary gland. It is subdivided into 3 parts:

It is composed of branching cords of polygonal cells surrounded by sinusoidal capillaries and supported by a network of (reticular fibers. The cells are of two types:

i. Chromophobes (52%), which have a weak affinity to stains. Chromophobes are cells smaller than the chromophils and have agranular pale cytoplasm. By EM, the cell organelles are few in the cytoplasm. Function: chromophobes do not secrete hormones. They are considered as reserve cells or degranulated chromophils (have no granules).

ii. Chromophils (48%), which have a great affinity to stains. They have granular darkly stained cytoplasm which classifies them into two types:

They secrete hormones of a protein nature. When these cells are stained with periodic acid Schiff (PAS) reagent, which is a stain specific for glycoprotein molecules, they do not take the magenta-red color of the stain. They are said to be “PAS-ve”.

Generally, these cells are smaller than the basophils but contain larger secretory granules. Acidophils are of two types: somatotrophs & mammotrophs.

They secrete hormones of glycoprotein nature so they and PAS +ve. Generally, they are larger than the acidophils, but contain smaller secretory granules. Basophils are of three types:

It is the funnel-shaped superior extension that surrounds the infundibular stalk. It is highly vascular. It is formed of chromophobe-like cells. Function: non-specific.

It lies between the pars distalis and pars nervosa. In humans, it is a rudimentary region. In lower animals, it is made up of colloid-filled follicles which represent remnants of Rathke’s pouch. Function: non-specific.

It lies posterior to the hypophyseal cleft. It is a pale stained fibrous part. It includes: 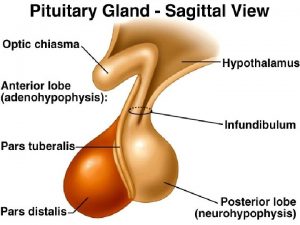 There are 2 types of connections between the hypothalamus and pituitary:

Neurohormones are hormones synthesized and secreted from special neurons into the circulation. The neurosecretion contains the following hormones:

The posterior pituitary hormones are initially synthesized in the cell bodies of the supraoptic & paraventricular nuclei of the hypothalamus, and then transported in combination with “carrier” proteins called neurophysins down to the nerve ending in the posterior pituitary.

Stimulation of the hypothalamic nuclei initiate action: potentials in their neurons, transmitted downward along the fibers from the supraoptic or paraventricular nuclei on reaching the nerve endings, cause the release of hormone by the usual secretory mechanism of exocytosis and is absorbed into adjacent capillaries from which they reach the general circulation.

These hormones are synthesized in the hypothalamus and transported to the anterior pituitary through the hypothalamic-hypophyseal portal circulation.