The ventilatory control mechanism must accomplish two tasks: It must establish the automatic rhythm for contraction of the respiratory muscles. It must adjust this rhythm to accommodate changing metabolic demands (changes in blood PO2. PCO2, and pH), varying mechanical conditions (changing posture), and ventilatory behaviors (speaking, sniffing & eating).

Systems for control of ventilation

Breathing is an involuntary process that is controlled by centers in the medulla and pons of the brain stem.

Two distinct nuclei within the medulla are involved in the generation of the respiratory pattern: the dorsal and ventral respiratory groups.

1. Dorsal respiratory group (DRG) primarily contains inspiratory neurons. It extends for about one-third of the length of the medulla and is located bilaterally in the nucleus tractus solitaris (NTS).

2. Ventral respiratory group (VRG) contains both inspiratory and expiratory neurons. It is ventral to the DRG. It consists of three regions that perform specific functions:

The pons modulates but is not essential for, respiratory output (normal pattern),

Generation of the Respiratory Rhythm

Eupneic breathing consists of two phases inspiration and expiration. Inspiration begins with a steady ramp-like increase in discharge from cells in the DRG and the intermediate VRG (pre-BötC) throughout inspiration. This leads to a gradual increase in the activity of the phrenic nerve output to the diaphragm during 0.5 to 2 seconds of inspiration. The ramp increase in activity helps ensure a smooth increase in lung volume.

At the end of inspiration, an off-switch event (BötC) results in a marked decrease in neuron firing, at which point exhalation begins. During the expiratory phase, the phrenic nerve is inactive; the diaphragm relaxes allowing for elastic recoil of the lung to its resting expiratory volume.

B. Chemical regulation of Ventilation

The central and peripheral chemoreceptors monitor the arterial blood gases-O2, CO2, and pH. A chemoreceptor is a receptor that responds to a change in the chemical composition of the blood or other fluid around it. The minute respiratory volume is proportional to the metabolic rate. 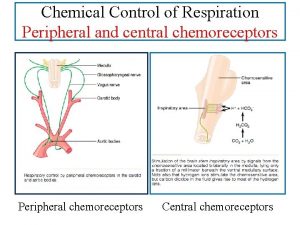 The central chemoreceptors, located in the brain stem, are the most important for the minute-to-minute control of breathing.

The BBB has a high permeability to small, neutral molecules such as O2 and CO2 but a low permeability to ions such as Na+, CI−, H+, and HCO3−. An increase in arterial PCO2 rapidly leads to a PCO2 increase of similar magnitude in the BECF, in the CSF, and inside brain cells.

The CO2 that enters the CSF is rapidly hydrated into H2CO3 that dissociates so that the local H+ rises. Increased H+ stimulates the receptors which increase ventilation to wash out excess CO2 and decrease arterial PCO2 back to normal.

The environment of the central chemoreceptors: They are bathed in brain extracellular fluid (ECF) through which CO2 easily diffuses from blood vessels to cerebrospinal fluid (CSF). The CO2 reduces the CSF pH, thus.

Characters of the central chemoreceptors:

The human body has two sets of peripheral chemoreceptors:

A decrease in arterial PO2 is the primary stimulus for the peripheral chemoreceptors. Increases in PCO2 and decreases in pH also stimulate these receptors and make them more responsive to hypoxemia.

Structure of the peripheral chemoreceptors

Each of the following changes in arterial blood composition is detected by peripheral chemoreceptors and produces an increase in breathing rate:

The carotid body can sense hypercapnia in the absence of hypoxemia or acidosis.

Decreases in arterial pH cause an increase in ventilation, mediated by peripheral chemoreceptors. This effect is independent of changes in the arterial PCO2 and is mediated only by chemoreceptors in the carotid bodies.