Nokia Lumia 920 supports IPS LCD capacitive touchscreen, 16M colors, It has a size of 4.5 inches (~62.5% screen-to-body ratio), It has a resolution of  768 x 1280 pixels (~332 ppi pixel density), It has a multitouch feature, It comes with Corning Gorilla Glass 2 for protection, It comes with PureMotion HD and ClearBlack display.

Nokia Lumia 920 supports a primary camera of  8 MP,  It has a resolution of 3264 x 2448 pixels, It has Carl Zeiss optics, autofocus, optical image stabilization, and dual-LED flash, It has features such as PureView technology, geo-tagging, touch focus, 4.5 of the display ensures a better view of videos,  movies, and games. 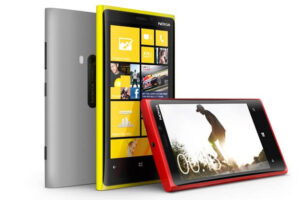 Nokia Lumia 920 supports a video of [email protected], optical stabilization, It supports a secondary camera of 1.3 MP, [email protected], It has sound alert types such as vibration, MP3, WAV ringtones, It comes with a loudspeaker, and it has a 3.5 mm jack with Dolby Headphone to improve the sound quality.

Nokia Lumia 920 supports Comms WLAN such as Wi-Fi 802.11 a/b/g/n, dual-band, DLNA, hotspot, It offers Bluetooth v4.0, A2DP, EDR, LE/ apt-X after the WP8 Denim update, It supports GPS, with A-GPS, GLONASS, It supports NFC technology, So, It can make the payments via transaction device compatible, and it comes with FM radio.

Nokia Lumia 920 supports micro USB v2.0, It has sensors such as the accelerometer, gyro, proximity, the compass, It comes with messaging such as SMS, IM, MMS, Push Email, Email, It supports Browser HTML5.

Nokia Lumia 920 support 3G and 4G network technologies, thus enabling a fast internet connection, It is available to port for video output, so it can display pictures or video on TV or other compatible devices.

Nokia Lumia 920 has a screen size of 4.5 inches wide so that the users become more flexible in navigating the screen, It has corning gorilla glass to protect from unwanted scratches, It has a ClearBlack display that serves to improve the sharpness of the color when too much light or in poorly lit rooms, and PureMotion HD Plus features that serve to further increase the sensitivity on the touch screen.

Nokia Lumia 920 has not Memory Card slot, The memory is not expandable and you can not upgrade the storage capacity, It does not support Java, Windows App Store has fewer Apps when compared to Android and iOS, It has not system-wide file manager or lock screen shortcuts.

Nokia Lumia 920 has a non-replaceable battery rated at 2000 mAh, The battery doesn’t perform more power-consuming tasks using GPS/ Maps, if there is any problem with the battery then it is not simple to replace it with the new battery, The battery life is just average, The Audio output is not so cool.

Nokia Lumia 920 is a huge smartphone by usual standards measuring 130.3×70.8×10.7 mm, It weighs 185 g that is unmistakably heavy especially while comparing it with the other top-end phones which Nokia Lumia 920 is up against.

Nokia Lumia 920 is cumbersome and can’t be managed easily, There have been complaints about Nokia Lumia 920 overheating on use, It comes only with 32GB of internal storage, It is not a User-Friendly Fine.

Nokia Lumia 920 is slow at taking pictures that end up systematically a bit blur, The videos were no better in quality and the lack of a one-click upload option to YouTube that makes it hard for you to upload them.