Samsung Galaxy Grand Prime has 1GB RAM and 8GB internal storage in which 5GB is user available, It has expandable storage support up to 64GB through micro SD card, It has 5 inches TFT capacitive touchscreen 16 colors with a screen resolution of 540×960 pixels and 220 ppi pixel density and Multitouch.

It has connectivity features such as 2G, 3G, Bluetooth, HSDPA, USB, and Wi-Fi, It supports USB tethering and Wi-Fi hotspot to use Galaxy Grand Prime as a modem, the battery back up is good which lasts for many hours even with heavy usage.

It has a 5MP wide-angle front-facing camera with high resolution, autofocus, LED flash, geo-tagging, face/smile detection, panorama & touch focus, and it has 8MP primary camera, the camera is capable of recording Full HD 1080p videos at 30fps, and the price is pretty cheap. 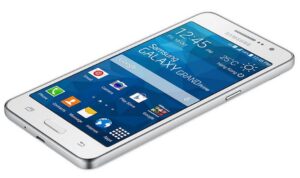 Samsung Galaxy Grand Prime has dimensions of 144.8 x 72.1 x 8.6 mm, Its weight is 156 g, It has other display features such as multi-touch, the sound alert types vibration are MP3, WAV ringtones, It has Li-ion 2600 mAh battery which is rated provide up to 17 hours of talk time and 75 hours of music playback.

It has an interesting camera, It has above an average camera resolution of 8 megapixels, with these features, Touch focus, Geo-tagging, Face/Smile detection, It has superior talk time and it offers a talk time of 1020 minutes, That’s clearly above the average.

The screen has good viewing angles and good colour reproduction, It performs great on day to day usage, The price of Galaxy Grand Prime is competitive and good value for money, The front-facing, as well as a secondary camera, takes good photos and records quality videos, It has misc colors such as white, gray & gold.

Samsung Galaxy Grand Prime has a lean body and design elegant, It uses colored metallic visible bazel premium, It has selfie 5 Mp camera resolution great with an ultra-wide viewing angle of 85° that will provide a wide viewing angle for shooting photographs with your friends.

It is from the fastest Android smartphones, It supports up to 64GB in memory expansion which is convenient to store pictures and video clips taken with the built-in 8-megapixel camera.

Samsung Galaxy Grand Prime has USB Connectivity micro USB v2.0, It supports Bluetooth, It has FM radio, It has sensors such as accelerometer, proximity, compass, and it comes with class Mid-end, It is a smartphone with a slim body and a widescreen, and it runs on pretty typical mid-range hardware.

There is no 720p HD screen resolution, a 5-inch screen without even 720p resolution is a downside, The display looks mediocre with poor pixel density, there is no NFC or OTG support, It is not a deal-breaker considering, the battery lasts one day, on heavy usage, It needs to charge twice.

Samsung Galaxy Grand Prime screen is low as it only armed with a TFT type screen with resolution 540 x 960 qHD pixels, It has not 4G LTE connectivity yet, It is only limited with 3G, It is a slower smartphone, It looks a little pale compared to recent smartphones.

Samsung Galaxy Grand Prime can record fancy 1920 x 1080 videos but we are surprised we didn’t find any sign of Galaxy Grand Prime sporting an HDMI port (which comes in handy to watch HD videos on your shiny HDTV without having to move them first to your computer), It weighs 156 grams, It is kind of chubbier than usual, It will be heavy to carry around and it has low resolution.