The screen of Sony Xperia Z Ultra has shatterproof glass for protection, It has Triluminos display with X-Reality Engine, It has crisp images free of jagged edges, making viewing photos, videos and other content very amazing, The screen is very suitable when dealing with rich gaming and media device.

Sony Xperia Z Ultra has Android OS, v4.2 (Jelly Bean), upgradable to v5.1 (Lollipop), It runs Qualcomm MSM8274 or MSM8974 Snapdragon 800, It supports Quad-core 2.2 GHz Krait 400, It supports Adreno 330, It has the most powerful current generation processor in any smartphone. 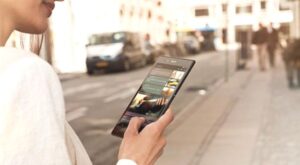 Sony Xperia Z Ultra has waterproofing and dust ingress protection, It has a headphone jack which no longer needs a cover, It has premium design and craftsmanship is evident in the impressive Xperia series smartphones.

Sony Xperia Z Ultra supports  IP58 certified, It has dustproof and water-resistant display over 1.5 meters and 30 minutes, So, The triluminos display is armed against the three most common mobile damaging factors.

Sony Xperia Z Ultra has Micro-SIM, It supports memory card slot, microSD, up to 64 GB, It has internal of 16 GB, It has 2 GB RAM, So, Multimedia, games, and applications will never face a memory constraint, as it has a 16GB internal storage which can be increased up to 64GB.

Sony Xperia Z Ultra has Sony Smart Bluetooth headset, It supports NFC, NFC is enabled and gets associated with the device via a Bluetooth, So it is easy to answer the calls and music playback on such a gigantic smartphone.

Sony Xperia Z Ultra has big display size, It has an unwieldy size for a phone, It is not suitable to the pockets, You can not carry it everywhere without having to take a bag but it can be a portable widescreen TV, It does not support Java.

Sony Xperia Z Ultra has non-removable battery, It attracts grease and dust, It has no camera shutter key, It has below average loudspeaker performance, It has rear 8MP camera without a LED flash, So, It is handicapped to low light photography.

Sony Xperia Z Ultra has a protective water-resistant coating on the display, It limits the viewing angles, It obstructs the viewing experience on a Full HD display, it has no proper video playback decoders (XviD, DivX ) out of the box.