The image of the body is formed by collecting the reflected rays on the body to be filmed on the photographic plate where the information is carried by the rays.

The photographic image: The sensitive photographic plate records only part of the information which is carried by the reflected rays from the surface of the body which is the difference in the optical intensity (which is proportional to the square of the amplitude). 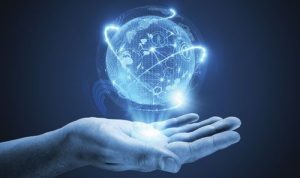 The mechanism of holography

In 1948, a Hungarian scientist Gabor proposed a method to obtain the missing component from the information of the image and retrieve it from the beam:

The used rays in holography must be coherent to obtain interference model and this can be achieved only by using laser, Using lasers many images can be stored on hologram and 3D images of moving bodies can also be obtained.

Laser rays are used with optical fibers for diagnoses and treatment by endoscopy and also it is used in ophthalmology.

Laser rays are used in communication with the optical fibers instead of telephone cables.

Laser rays are used in rocket guidance with high accuracy and in smart bombs and laser radar (LADAR) in what is known as Star Wars, where lasers are used to destroy missiles and planes in space after lunch directly.

Laser rays are used in recording on CDs (Laser CDs), They are used in the laser printer, where the laser beam is used to transfer information from the computer to the disc by the photosensitive material then printing on paper using ink.