Laser Deposition Technology (LDT) is the process in which the metal powder is injected into the focused beam of a high-power laser under tightly controlled atmospheric conditions, The focused laser beam melts the surface of the target material & it generates a small molten pool of base material.

Laser Deposition Technology comes with many processes that are direct metal deposition (DMD) , laser additive manufacturing (LAM) , laser metal deposition & the others which use the focused laser beam as the heat source for depositing powdered metals.

The laser metal deposition (LMD) is the additive manufacturing process in which the laser beam forms the melt pool on the metallic substrate, into which the powder is fed, The powder melts to form the deposit which is fusion-bonded to the substrate.

The required geometry is built up in this way, layer by layer, the 3D part is created, Both the laser and nozzle from which the powder is delivered are manipulated using the gantry system or the robotic arm.

The powder delivered into the same spot is absorbed into the melt pool, thus generating the deposit which may range from 0.005 to 0.040 in. thick and 0.040 to 0.160 in. wide, The resulting deposits may be used to build or repair the metal parts for many different applications. 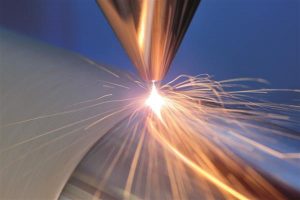 Laser metal deposition (LMD) is the generative laser procedure in which metal is applied on existing tools & components in the layers , The laser generates the molten bath on the existing surface into which one or more metal powders is sprayed through a nozzle , The powder then melts and bonds with the base material , Bit by bit , The new material layer develops .

Laser metal deposition (LMD) can be used in any industry which requires the creation or repair of high-value or bespoke parts, especially those on the larger scale , We have delivered LMD solutions to the companies in the aerospace, oil & gas , power and tooling sectors .

Laser Deposition Technology can be used in the fabrication & repair of the parts in titanium , nickel , aluminium, steel and cobalt, It controlled the preheat and cooling rates & post-processing heat treatments , It is used in process & procedure development for new materials .

Laser Deposition Technology is used in the mechanical & metallurgical analysis of LMD builds , It is used in surface finishing, It can be used in non-destructive testing of LMD parts , There are three main areas where LDT can be used in industry & manufacturing .

Repair of the titanium blade using the laser repair technology ( LRT ) : The repair of worn components when operating any type of mechanical equipment with moving parts, Repairing or rebuilding the worn metal components is part of everyday life.

Repairing the worn components typically saves a lot of money over purchasing new ones , Laser Repair Technology ( LRT ) makes it possible and cost-effective to repair the parts which were previously unrepairable .

Laser Freeform Manufacturing Technology (LFMT) builds directly from CAD files , It starts with CAD drawing of the part , From this electronic drawing , The tool path file is built , The laser deposition system builds the part , layer by layer , LFMT can build complex shapes , prototyping & manufacturing some parts in far less time than any other technique .

Laser deposition welding is used to reduce manufacturing costs , Using LMD work-piece properties can be targeted for improvement by systematically refining or combining materials , The softer metal will have a hard , high-quality surface , You can combine the thermally insulating material with the conductive layer or coat metal with the materials which resist high temperatures, salt , water , or chemicals .

Laser deposition will not lengthen the life of your components but it will reduce the overall manufacturing costs , Laser metal deposition has many benefits that result in faster production times & lower costs , It conducts less heat into the substrate material than many conventional techniques , It can create a fine micro-structure , with low levels of dilution between layers & low distortion .

laser metal deposition reduces the material wastage ( improved buy-to-fly ratio ) & tooling costs , It offers a large working envelope for large AM components , It has near-net and net-shape capabilities , It is capable of producing functionally graded parts , It allows for fully customized parts to suit the individual requirements , It is effective for both fabrication & repair .

The laser metal deposition produces the metallurgical bond which permanently attaches the deposited metal onto the base material, creating the best possible adhesion, The process itself is relatively simple, The laser beam produces a weld pool on the surface of the component.

When the powder jets blow the metallurgical powder into the weld pool coaxially to the working beam , The powder melts and it is metallurgically bonded onto the base material , It enables new layers of the metal with defined properties to be applied , even against the force of gravity and it can increase the wear resistance of the component surface .

Laser deposition welding hasn’t become a mainstream application like laser cutting , The reasons might be that the capital cost has been too high to justify the process as compared to the other heat sources or the price for the new component was too low to justify a repair .

Laser deposition welding is not considered robust or repeatable enough to be used in more than a few select applications where there is simply no other practical solution , It is the viable process which has been underutilized until recently.

The advent of higher-powered lasers with the beams which can be delivered through the fibers and integrated into the robust machine tools , decreased capital investment and operating costs of the laser device , In combination with the increased cost of the metals & the use of higher-performance materials , has caused many to rethink of the use of LMD process while producing new components or repairing used ones .