The oscillating circuit, Tuning or resonant circuit in the wireless radio receivers

When the switch (a) is turned off and switch (b) is turned on: The capacitor discharges its charge through the inductive coil and therefore a momentarily current passes from the positive plate to the negative plate, that decreases the voltage across the capacitor till it collapses and the electric field between its plates vanishes.

As this current fades gradually, a forward current is induced in the coil by self-induction that draws more charges from the positive plate of the capacitor towards the negative plate.

Next to that, the capacitor is charged another time through the coil in a direction opposite to the original charge, Thus the charging and discharging of the capacitor is cycled and an electric oscillation of high frequency is produced in the circuit, interchanging the energy alternately between the two fields.

The process of charging and discharging in the oscillating circuit stops after a while, due to the ohmic resistance of the coil and the other circuit wires, a part of the energy is dissipated as heat energy, This result in a gradual decrease in the alternating current in the circuit and the voltage across the capacitor plates, as well, This hinders charging and discharging process causes the current eventually to die away to zero .

However, if this loss is compensated by extra charges supplied to the capacitor, the oscillatory action of passing energy back and forward between the capacitor and inductor will continue indefinitely.

The relation between the frequency, XL, XC, R and Z

Deduction of the resonant frequency

In the oscillating circuit when capacitive reactance and inductive reactance are equal they cancel out each other, leaving only the resistance of the circuit to oppose the flow of current, thus the current reaches its maximum in that circuit.

The circuit frequency (f) can be deduced as follows:

Taking the square root for the two sides

Resonating the circuit frequency with the source frequency can be achieved either by tuning (varying) the source frequency, the capacitance or the coil inductance, Resonance in the tuned circuit and in sounds are alike, Intensity of the sound strengthens when two tuning forks vibrate at the same frequency and weakens when their frequencies differ markedly.

Conclusion: If multiple frequencies of different electric sources affect an oscillating circuit at the same time, the circuit does not allow current to pass except that having frequency either equal or so close to the circuit frequency.

The tuning (resonant) circuit is an oscillatory circuit contains a resistor, induction coil, capacitor & AC source and does not allow to flow a current except that has the same frequency as its or so close to it.

When the circuit is resonant:

In case of comparing the frequency of two oscillating circuits: 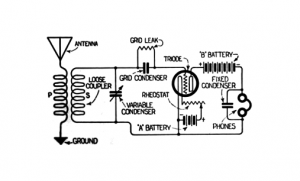 In the radio receiver, the tuning circuit is connected to the antenna that is hit by electromagnetic waves of different frequency transmitted by different stations, These different frequencies generated in the antenna currents having the same frequencies of their stations, Thus, the tuning circuit in the radio receiver allows only the current that has frequency equal to that of the circuit to pass.

When you like to hear a certain broadcast station, you tune the frequency of the circuit either by altering the capacitor capacitance or the number of turns in the coil to allow only the current that its frequency resonates with the circuit frequency.

This current then undergoes processes of amplification, rectification and finally the current which expresses the sound is separated to pass through loudspeaker.