The word atom goes back to a Greek origin, meaning the indivisible, Scientists put different models for the structure of the atom based on many experimental evidences, Bohr studied the difficulties faced by Rutherford’s model and proposed a model for the hydrogen atom using Rutherford’s findings.

He then added three more postulates:

When hydrogen atoms are excited (given energy), we will observe the following:

Different series of atomic spectral lines for hydrogen are produced and are arranged as follows:

Paschen’s series: The electron moves down to level M (n = 3) from higher levels, Spectrum range is Infrared ( I R ) range.

Bracket’s series: The electron moves down to level N ( n = 4 ) from higher levels, Spectrum range is Infrared ( I R ) range.

Pfund’s series: The electron moves down to level O (n = 5) from higher levels, This series lies in the far IR and is the longest wavelengths (the shortest frequencies).

Calculating the energy of radiation : 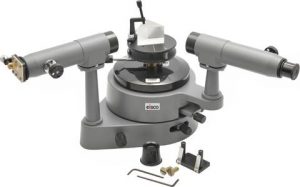 Operation of the spectrometer to obtain a pure spectrum

The conditions of obtaining a pure spectrum by the spectrometer: The prism at the minimum deviation position and the parallel rays for each colour are collected at the focal plane of the objective lens.

By studying the spectra of different materials whose atoms are excited, we will find two types of spectra which are Emission spectrum and Absorption spectrum.

Emission spectrum is the spectrum resulting from the transfer of excited atoms from higher energy level to a lower level, There are two types:

When white light passes through a certain gas, some wavelengths in the continuous spectrum are found missing after analyzing, these wavelengths are the same as those which appear in the emission spectrum of the gas and are called line absorption spectrum.

Line absorption spectrum is dark lines of some wavelengths in the continuous spectrum of white light and these lines due to absorption of the vapor of the element to the spectrum lines characterizing it.