Steady flow , Turbulent flow and Applications on the continuity equation

We can distinguish between two types of flow in fluids which are Steady flow and Turbulent flow , When a liquid moves such that its adjacent layers slide smoothly with respect to each other , we describe this motion as a laminar flow or a streamline ( steady ) flow , Every small amount of the liquid follow continuous path called streamline .

Steady flow is the flow in low speed such that its adjacent layers slide smoothly with respect to each other , Streamline is an imaginary line shows the path of any part of the fluid during its steady flow inside the tube , The density of the streamlines at a point is the number of streamlines crossing perpendicular a unit area point .

Characteristics of the streamlines

Conditions of the steady flow

Flow rate is the quantity of liquid flowing through a certain cross-sectional area of a tube in one second , Flow rate could be volume flow rate and mass flow rate .

Calculating the flow rate at any cross-sectional area :

From the definition of the volume flow rate :

From the definition of the mas flow rate :

The amount of liquid entering the tube = that emerging out of it in the same period of time .

Flow rate ( volume or mass ) is constant at any cross-sectional area and this is called law of conservation of mass that leads to the continuity equation .

Imagine that a tube has a fluid in a steady flow where the previous conditions of steady flow are verified .

Consider two-cross sectional areas ( A1 , A2 ) perpendicular to the streamlines :

The flow rate ( volume or mass ) is constant in case of steady flow . 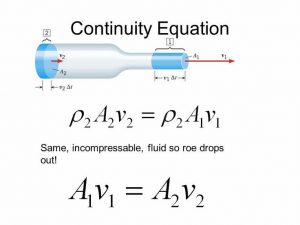 The velocity of a fluid in a steady flow at any point is inversely proportional to cross-sectional area of the tube at that point .

The tube is cylindrical having two cross-sectional area one is wide and the other narrow .

The tube is branched into ( n ) branches of the same cross-sectional area .

Applications on the continuity equation

Design of the gas opening in the stoves , Opening are small so that the gas rushes fast out of it in a high speed ( v ∝ 1/A ) .

The turbulent flow is the flow when the speed of the fluid exceeds a certain limit and is characterized by small eddy currents , The steady flow of a fluid ( liquid or gas ) becomes turbulent flow if :

Applications on the pressure at a point ( Connected vessels , U-shaped tube & Mercuric barometer )

Factors affecting the force of viscosity and Applications on the viscosity