The core of these systems that allows the complete automation of the milking process is the type of the agricultural robot, The automated milking is also called robotic milking, The popular systems rely on the use of the computers and the special herd management software.

The robots are the automatic or voluntary milking systems, they mainly in response to rising the labour costs on the farms in many dairy producing countries, They are used to replace the manual labour demands incurred through the fixed milking times so the farmer’s time was free to spend elsewhere. 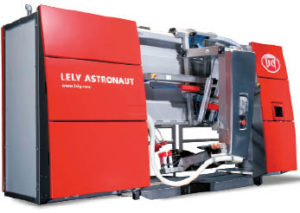 The milking process is the collection of tasks that devoted to extracting the milk from the animal (rather than the broader field of the dairy animal husbandry), and maintaining the milk yield during the lactation period (approximately 300 days) requires the consistent milking intervals.

The robotic milking systems can free up labor, they do not need to be managed, They are becoming more common worldwide, They improve the quality of the life due to the reduced labour demands and greater time flexibility, They can cut four to five hours of the labor a day.

The robotic milkers can do more than just milk the cows, They can collect the valuable data and information like the individual cow milk production, milk’s electrical conductivity (the indicator of its quality), the cow activity, and the cow rumination data.

The milk can have the same somatic cell count (SCC) or the lower one, compared to the people doing milking, the farm can achieve the same or better herd health and reproduction, Less water and cleaning chemicals tend to be used with the robotic milkers, compared to the parlors but the electricity usage might run higher.

The automatic milking systems are working well in the free-stall and the bedded pack barns, and for the grazing operations, Higher-forage rations entice the cows to enter the AMS, most farmers feed the flavour-enhanced pellets, The pellets encourage the cows to visit the milkers, A second preferred choice to feed at the robots is roasted soybeans.

AMS requires a complete automation of the milking process, The milking unit comprises the milking machine, the teat position sensor (usually the laser), The robotic arm for the automatic teat-cup application and removal and the gate system for controlling the cow traffic.

The automatic milking decreases the contact between the farmer and the herd, It removes the farmer from such close contact with the animal, It offers increased milking frequency, Milking frequency may increase to three times per day, This may result in less stress on the udder and increased comfort for the cow.

The cow movement through the robotic milkers can be slowed by the activities such as the manure scraping, the herd health, and the hoof trimming, Cow throughput can be slowed if the robot has problems attaching the unit because  the cow has dark teats, long hair on her udder, a tilted udder, or teats that touch each other.

There’s the fact that some cows may not want to have anything to do with the robots at first, training the cows to AMS can take a long time and would not be classified as a pleasant experience.

While the robots free the people from having to milk most cows, there is a trade-off, You must be on call 24 hours a day, seven days a week, in case there’s a problem, and the big problem is the cost of getting the farm set up with the robotic milkers.

The dairy farmers learn how to handle minor repairs, Some parts are expensive to replace if their warranties have expired, These include the lasers that locate the cows’ teats and the hydraulic arms which move in an out from underneath cows.

The final manual labour tasks remaining in the milking process were cleaning and inspection of the teats and attachment of the milking equipment (milking cups) to the teats, It is a complex task and it requires the accurate detection, The tasks have been automated successfully in the voluntary milking system (VMS), or the automatic milking system (AMS).

Robotic milking has higher initial cost, Whether it is economically beneficial to invest in an AMS instead of the conventional milking parlor depends on the constructions costs, The investments in the milking system and costs of labour.

The AMS is expensive for smaller scale farms, and large dairies can operate more cheaply with the milking parlor, Robotic milking has increased electricity costs to operate the robots but this can be more than the outweighed by the reduced labour input.

The system requires the high quality of management as all milking cows have to visit the AMS voluntarily, AMS works best in zero-grazing systems, In pasture systems, the cows graze in the fields and they are required to walk to the milking parlour, The cows do not attend the milking unit if the distance to walk is too great.

In the conventional milking, the cows are observed before the milking equipment is attached, and the ill or injured cows can be earmarked for attention, The automatic milking removes the farmer from such close contact with the animal.