Wheeled robots are robots that can move on the ground with the use of their motorized wheels to propel themselves, This design is preferred because it is simpler than legged designs, Design, production and programming processes for moving on flat terrain are easier, and wheeled robots can be controlled easily than other robot types.

Wheeled robots are most popular among the consumer market, They offer low cost & simplicity, They come with any number of wheels, but three wheels are sufficient for static and dynamic balance, Additional wheels can add to balance, and Additional mechanisms will be required to keep all the wheels in the ground when the terrain is not flat, The wheeled robot design is preferred due to simple locomotion mechanism, It can use various locomotion methods depending on their number of wheels. 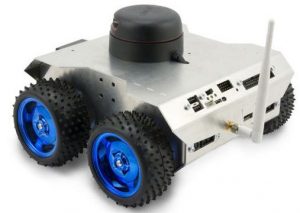 The wheels facilitate movement by reducing friction, Many robots are designed with 3 wheels, 2 motors & 2-speed controllers, Wheels help to move quickly, They are easily controlled, spin on the spot, or turn around in small places and they help in steering compared to tracks.

Wheels are used due to their low production costs, this is the case if we compare the prices for wheels and tracks, the wheels need a lower amount of torque to move on from stationary, The wheels offer high maneuverability compared with continuous tracks, and the tracks are very difficult in maneuverability.

Many materials can be used to build wheels that meet environmental conditions, The wheels are lighter than tracks, So, wheels are used when the mass of the robot is a critical property, such as in space exploration missions, The wheel comes with fewer moving parts, So there are fewer components that can get damaged.

Many wheeled robots use differential steering, that uses separately driven wheels for movement, They can change direction by rotating each wheel at a different speed, There have additional wheels that help keep it balanced and they are not driven by a motor.

One-wheeled robots are difficult to keep balanced due to the single point of contact with the ground, They have only one wheel, It is easier to use a spherical wheel rather than a typical disc wheel, as the robot can move in any direction along the sphere, Gyroscopes & counter-torque mechanisms can keep the robot upright.

Two-wheeled robots are simple, They have their wheels parallel to each other, and they are called dicycles, or one wheel in front of the other, For the robot that has the left and right wheels, it comes with at least two sensors, The tilt sensor is used to determine tilt angle & wheel encoders keep track of the position of the platform of the robot.

Two-wheel robots are extremely popular nowadays due to their efficient design, All you need is a couple of motors & two wheels to move around, but they also have their own drawbacks, Two-wheeled robots are harder to balance than other types, they use two wheels and should keep moving to maintain its upright position, To make it more stable, batteries from which they are powered are mounted directly below their bodies.

Roombas are two-wheeled vacuum cleaners that automatically move around cleaning up a room, They use a contact sensor in the front and an infrared sensor on its top, Segways are self-balancing dicycle electric vehicles, Ghost Rider was the only two-wheeled robot entered for the Darpa Grand 2005 Challenge, It was unique because of its motorcycle design, but the wheel alignment is front & back, that makes it harder to balance as it turns, and its design is less common than that of a dicycle.

The direction of the robot can be altered by changing the relative rate at which the two powered wheels are rotating, it will continue to go straight when two wheels have the same rate of rotation and the same direction.

Omni Wheels are another option for wheeled robots, An Omni wheel has an axis perpendicular to the axis of the core wheel, This allows the wheels to move in two directions, Omni-wheeled robots can move at any angle in any direction, without rotating beforehand.

Some Omni wheel robots use a triangular platform, with the three wheels spaced at 60-degree angles, Benefits of using 3 wheels & not 4 are that they are cheaper, 3 points can be used on the same plane and only one wheel will be rotating in the direction of travel.

The drawbacks of using Omni wheels is that they have poor efficiency due to not all the wheels rotating in the direction of movement, which also causes loss from friction, and they are more computationally complex because of the angle calculations of movement, The free rotating rollers allow the wheel to slide laterally.

4 wheel drive robot comes with 2 pairs of powered wheels, Each pair can turn in the same direction, If the pairs don’t run at the same speed, the robot will slow & won’t be able to drive straight, A good design will have to incorporate some form of car-like steering, Differential Steering method allows the robot to turn in the same way the car does, when your robot is powered by a combustion engine, It only needs one motor.

Wheeled robots can not navigate well over obstacles, and this is the main drawback of this type, depending on the terrain, such as rocky terrain, sharp declines or areas with low friction, There are some situations where the wheels are not the best choice, The robot needs to pass small or large obstacles, Wheeled robots are useless in terrains that are not flat & have low friction coefficient, For a wheel to get over a vertical obstacle, it has to be at least twice as tall as the vertical obstacle.