Robots are used for palletizing, packaging & repacking, picking & placing, production & processing, Robotics can help offset rising labor costs, it can be a significant investment in terms of installation & maintenance, Robots do not tremble like human hands, They have smaller, more versatile moving parts that help them perform tasks more accurately than humans.

Robot in grocery stores can check for items that need restocking, re-pricing due to error or re-shelving due to messy placement, Grocery robots do their jobs more easily & efficiently, Robots can be showing up in your local grocery store, Thanks to the enhanced safety, more compact designs and more versatile machine vision systems, Robots at grocery stores may soon be a common sight for the shoppers.

Robot plays a vital role in helping humans to do work more efficiently, A large robotic arm can see & grab dozens of different products, It is built from aluminum & featuring a simple suction nozzle as its hand, The arm is from the major robotics projects, There’s a human-shaped handmade out of translucent plastic tubes, controlled with compressed air.

The humanoid robot can run around on wheels, It has cameras in the place of eyes in its head & a telescopic torso that allows it to reach high places, It uses 2D & 3D depth-sensing cameras, along with multiple sensors to capture the items with radio frequency identification (RFID) tags and invisible barcodes. 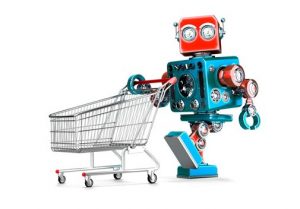 Robots are much cheaper than humans & their cost is now decreasing, we can’t compare human capabilities with competitor robots, but robotic capabilities are developing rapidly, As robots are more active & do not get tired like humans, the collaboration between humans & robots reduces absenteeism, The pace of the human can’t increase, so robots help humans.

There are many automated checkout lines such as online grocery ordering & meal kit services, robots aren’t being used to replace people, but to help them do their jobs better, Self-checkout lanes give the way to self-return touchscreen kiosks and touchscreen info stations where customers can compare like products such as thermostats or internet-connected speakers, Cash machine can count bills & coins which used to be tallied by hand.

Automated era starts, Robots learn to do rote tasks, There are many pilot programs for introducing the robotic workforce to the local grocery, Robots can efficiently manage logistics at the grocery warehouse and they show up right in the aisles of your local supermarket.

Robots have proven excellent at managing common tasks in logistics hubs, With sophisticated servo-mechanisms, they can safely palletize, de-palletize, transport, and inspect goods, however, their capabilities have remained somewhat limited, they require a controlled environment and work best with the objects of a definite weight, shape, and size.

Through faster wireless networking & other innovations, The supermarket can use grocery-sorting robots in its warehouse operations, They can use the most densely packed mobile network, Grocery robots can sort many crates from their positions, they receive up to ten commands per second, they reduce the errors and maximize the productivity.

Grocery robots can recognize when supplies are low and find the items that are shelved incorrectly, With robots in charge of time-consuming inventory tasks, human workers can focus on the customer service and the other high-level issues that contribute to a better experience.

Robots were used only to the manufacturing industry, but today they are an integral part of many workplaces, The future is more promising for this marvel of artificial intelligence, You can imagine a robot performing some of the main tasks of managers, such as using the data to assess the problems, make better decisions, monitor team performance, and set goals.

Automation will become an integral part to do many tasks in grocery stores, So, robots will replace many jobs that are now performed by humans, Dash robotic shopping cart creates a digital map of store layouts and leads customers directly to what they need, It can lead customers to their parked car and return itself to a docking station afterward, Dash cart could be potentially useful in big box or warehouse club stores.

The retailers benefit from targeted advertising opportunities, as the cart navigates through certain store sections, it can generate relevant ads or promotions on its tablet display, users like to look at the screen while it’s moving in front of them.

Customers can also pay right at the cart, builds on the trend of self-checkout lanes in stores today, So many stores are moving to self-checkouts and this is really a mobile self-checkout, Dash robotic shopping cart costs about $5,000, depending on the level of software and hardware customization, Models are also available for leasing and cost a few hundred dollars a month.

Although, robots perform dull, dangerous, or dirty tasks and they do not require paid holidays and benefits, They are stealing human jobs that could trigger public relations concerns, Jobs will be lost, Robots can replace human workers to put 50 groceries in the basket in just five minutes.

While robots increase efficiency, they also increase the unemployment rate, With robots, human labor is no longer required in many supermarkets, Robots can handle their prescribed tasks, but they can’t handle unexpected situations, Your company’s return on investment may suffer if your operation relies on too many robots.

Robots have higher expenses than humans, so by the end of the day, you can’t achieve the desired return on investment, Robots are not as intelligent as humans, They can’t improve their work outside of predefined programming because they just cannot think for themselves.