Android 13 is the thirteenth major release of the Android mobile operating system, It is developed by the Open Handset Alliance led by Google, It is planned that the first phones to launch with Android 13 will be the Google Pixel 7 and 7 Pro, It is internally codenamed Android Tiramisu, and it was released for the public on August 15, 2022.

Android 13 was announced in an Android blog posted on February 10, 2022, and the first Developer Preview was immediately released for the Google Pixel series (from Pixel 4 to Pixel 6, dropping support for the Pixel 3 and Pixel 3a), It was released 4 months or so after the stable version of Android 12.

Developer Preview 2 followed later, releasing in March, Beta 1 was released on April 26, 2022, and Google released beta 2 during Google I/O on May 11, 2022, Two more beta versions were planned for release in June and July, and Platform stability was reached in June, with Beta 3, The final release of Android 13 began on August 15.

Android 13 comes with many new features intended to enhance user privacy, both user-facing and developer-facing, Android 13 supports a new media picker that improves privacy by allowing the users to choose which photos and videos apps have access to, Most apps have not implemented this picker yet. 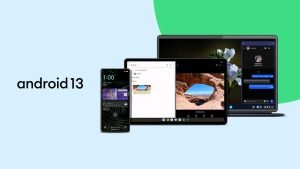 Android 13 offers new permission, NEARBY_WIFI_DEVICES, Previously, Wi-Fi and GPS permissions were bundled into a single setting termed “Location”, so apps can search for nearby devices and networks without the need to access broader navigational systems. Apps are now required to request permission from the user before they can send notifications, Android 13 supports a new runtime permission feature for apps sending non-exempt notifications.

Android 13 offers Bluetooth LE Support, The most recent Bluetooth iteration uses less power, It allows for multi-device pairing, and lessens stuttering, Android 13 supports Spatial Audio, Google is working on a new feature that gives your audio devices a 3D effect when they are connected to your Android Smartphone. Your notification section media player will have a fresh new design too.

Android 13 supports Redeveloped Photo Picker, The redeveloped Photo Picker, which was included in the first developer version of Android 13, inherits a function that is present in Apple’s – iOS 15, Instead of sharing your entire gallery, you can decide which individual photographs to share with an application, By limiting what apps can view to the specific information you want to share with them, the feature offers an additional layer of privacy.

Android 13 offers small changes to dialog windows such as the Internet toggle, making them fit better with the design language, As of Developer Preview 2, the media player has been redesigned, now using the album cover as a background, and including more user controls, In the early previews, silent mode disabled vibration completely, including haptics.

Android 13 supports vibration setting: Haptics: In DP2, Silent Mode effectively deleted all haptic input; this contentious modification was reversed in Beta 1, There are a few new vibration options, but they don’t appear to accomplish anything as of now.

Android 13 supports Themed 3rd-party icons, You may recall that Android 12 introduced the ability for icons to change color to match your wallpaper, even though this function was only available for Google’s apps, Android 13 offers Dual eSIM support: In Android 13, Google may present a means to link different carriers to a single eSIM, claims a report (Unofficial).

Android 13 supports an adjustable flashlight, according to the recent report from Esper, it has been discovered in the developer beta that indicates Google will allow you to control your flashlight’s brightness instead of turning it on or off, It will be helpful to have this feature included by default as it has been available for some time on Apple’s Smartphones and some Android brands.

Android 13 supports Newly Developed QR Code Scanner, Two new QR code scanner settings are visible in screenshots that the popular website – Android Police has obtained, The first one allows scanning of restaurant menus without having to unlock your phone by giving you accessibility to the QR Code scanner from your lock screen.

Android 13 supports new designs: The Android 13 final release offers a bunch of new designs, wallpapers, themes, and fonts. Android 13 supports Redesigned “Now Playing” Widget, The media bar that appears on your notifications when you have music playing on your phone has now been redesigned, The control buttons have been slightly rearranged, and the widget’s display will now be entirely covered by album art.

Android 13 may alert you to malicious programs that abuse high battery use, particularly in the background, it just exists in Google documentation, so we’ll have to wait to see how it performs in practice, Android 13 will allow users to choose between two clock designs on the lock screen. The existing double-line layout or a single-line layout will be available to users.

Android 13 supports Bluetooth LE Audio and the LC3 audio codec, which allows receiving and sharing audio between multiple Bluetooth devices simultaneously, it can improve the audio quality and battery life of the connected devices, as long as they also support it.

This version opens the support for third-party apps to use Themed Material You icons, Long-pressing and dragging a notification. As of Beta 2, the Pixel launcher offers a new “unified” search bar, which can offer search results from the internet as well as local apps and activities.