Simple eyes consist of one lens , Compound eyes consist of large number of separate lenses which work together to form a stereoscopic image of the object where each lens picks up a different part of the object , The number , area and shape of these lenses differ depending on the species .

Phylum Arthropoda is classified into four classes , which are :

The body consists of two regions : small cephalothorax and abdomen , It is covered with a chitinous cuticle , They have many jointed appendages adapted in different forms to perform various functions , Their eyes are compound and they breathe by gills , Examples : Prawn , Crab ( sea cancer ) and Lobster .

The body consists of two regions : small cephalothorax and abdomen , They have four pairs of walking legs , Their eyes are simple , They breathe by tracheoles or lungs books , Examples : Spiders , Scorpions , you notice that they are unisexual .

The body consist of three regions : small head , thorax and abdomen , They have three pairs of walking legs , two pairs of wings which may be absent ( as in majority of ant species ) or reduced into one pair ( as in house flies ) , They have one pair of compound eyes and one pair of antennae , They breathe by tracheoles , Examples : Flies , Mosquitoes , Cockroaches , Ants , Bees , Moths and Locusts .

The body consists of two regions : head and trunk , It is compound of several segments , They have many legs , They breathe by tracheoles , Such as Scolopendra . 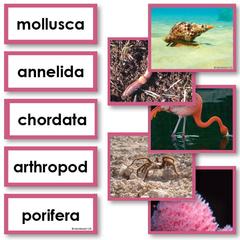 Their majority live in salt water , some in fresh water and few on land , It is a soft mass , It has a calcareous shell which may be external , internal , absent or reduced , The majority are unisexual and few are hermaphrodites .

It is unsegmented and has a muscular part used in locomotion called the foot , It has a well developed head ( carries sense organs ) and it may be absent in some species , It has an organ similar to the tongue ( in most molluscs ) called the radulla used in feeding , Examples : Desert snail , Oyster and Octopus .

It may be rounded , cylindrical or star-shaped and some have arms , it is unsegmented and has a hard endoskeleton , its wall has spines and calcareous plates ( in some of them ) , it has sucker-like structures called tube-feet .

It is unisexual , They reproduce sexually by gametes and asexually by regeneration , Examples of Echinodermata : Sea star , Sea urchin and sea cucumber .

It includes the most higher animals in animal kingdom , The embryos of chordates are characterized by presence of a skeletal structure at its dorsal region called the notochord , which either persists throughout the whole life or be converted into a vertebral column in the majority of chordates , Phylum Chordata is classified into several sub-phyla , the most important one is sub-phylum Vertebrata .

Notochord first appears in vertebrates in the embryonic stage and is replaced as the embryo develops by the vertebral column which surrounds and protects the spinal cord .

They have circulatory system consists of a heart consists of several chambers , blood vessels in which blood flows in a closed circulation to feed all body organs with oxygen and nutrients .

Classes and General characteristics of Vertebrates