Mechanism of the transport in higher plants , Theories explain the ascent of water in plant

Xylem is responsible for the translocation of water and minerals salts from the root to the leaf by forces acting on ascent of this sap in the plant , There are many theories that explain the ascent of water in the plant .

If the plant stem is cut very near to the soil level , we can see the exudation ( exiting ) of water from the stump , This phenomenon is known as exudation which occurs due to the root pressure that continues to force water up the plant .

Root pressure is a force or pressure that arises in the root , due to the continuous and direct absorption of water by osmosis , Exudation is the phenomenon of exiting of water from the plant stem , when it is cut very close to the soil surface under the effect of root pressure . 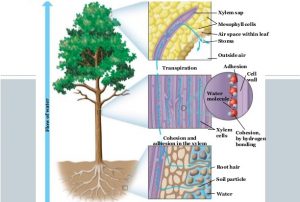 Mechanism of the transport in higher plants

Experiments have proved that there is no reasonable explanation for the ascent of water to high-levels in tall trees by root pressure , because root pressure does not exceed 2 atm , pinus and other conifers have no root pressure , The force of root pressure is affected quickly by the external factors .

The colloidal nature of cellulose and lignin in the walls of xylem vessels has helped them to imbibe water , This phenomenon has a very limited effect on the ascent of sap , as experiments have proved that the sap ascends through the cavities of xylem vessels and not along their walls only .

Capillarity phenomenon is a weak secondary force for the ascent of sap , as the finest capillary tube does not allow the rise of water more than a height of 150 cm .

This theory originated principally by the two scientists H.H. Dixon and J.Joly in 1895 , They proved that the principal forces which pull water upward to very high levels approximately 100 m through the xylem vessels depending upon the following :

Some seedlings , when transplanted from a nursery to an open soil , fail to grow if they remain exposed to the sun for a long time , Because they were subjected to dryness & formation of air bubbles inside the conducting tubes ( xylem vessels and tracheids ) , causing the break of water column inside these tubes and finally the seedlings wilt and die .

The transpiration pull of leaf will not only pull water that has reached the vascular cylinder of root up , but it will also help in the lateral pull of water from the root hairs .

The phloem translocates the manufactured food ( which consists of high-energy organic substances that are produced by the leaf during photosynthesis ) in all directions :

Role of sieve tubes in the transportation of ready made food

Experiments have proved the role of sieve tubes in the transport of ready made food substances to various parts of the plant as the following :

Experiment 1 : The two scientists Rapeden and Bohr in 1945

They traced the path of radioactive carbohydrates in the plant , Carbohydrates were translocated upwards as well as downwards in the stem .

He used Aphid insect ( it feeds on the ready made food of plant ) to describe the contents of sieve tubes , in order to identify these contents .

Steps : The insect penetrated the tissue of plant , until it reached the sieve tubes by its piercing mouthparts , So , the food passed through the mouth of insect to its stomach .

He separated the whole body of insect from its mouthparts during its feeding , so , he managed to collect a sample of the seive tubes contents , then he analyzed the sample , So , the sample of sieve tubes was consisted of organic substances which were manufactured in the leaves ( sucrose and amino acids ) .

He sectioned the region of plant where the proboscis of insect was inserted , So , the proboscis is appeared to be inserted in a sieve tube by its piercing mouthparts .

Conclusion : The absorbed food by the insect was the sap of phloem that was transported to all the plant parts .

Mechanism of organic substances transport in the phloem

In 1961 , the scientists Thain & Canny could see long cytoplasmic threads that contain the organic substances inside the sieve tubes and these lines extend through the tiny pores of sieve plate from one tube to another which is known as the cytoplasmic streaming .

Cytoplasmic streaming is the circular movement of cytoplasm inside the sieve tubes and companion cells by which the organic food substances are translocated .

Thain & Canny explained the transportation of the organic substances in the phloem on the basic of cytoplasmic streaming as the following :

Thain & Canny explained that this activity needs more ATP molecules that exist in the companion cells , This is proved later by : The experiments which show that the transportation process is delayed with the decrease of temperature or oxygen in the cells , thus delaying the movement through the sieve tubes .

In scientific references , it is mentioned that the organic food substances pass from one sieve tube to the neighbouring ones through the cytoplasmic strands which pass from one tube to another .

Transportation in plant , Structure & role of the plant stem in the process of transportation