Despite of blood components are constant in all humans , but they differ in blood groups, Scientists classify blood groups into four groups which are: A, B, AB and O, The 14th day of June is the universal day of blood donation, This day agrees with birthday of Austrian scientist Karl Landsteiner , the discoverer of blood groups .

Inheritance of blood groups is controlled by three types of genes called alternatives ( allels ) , from which the individual inherits one pair only that carried on that carried on the 9th chromosomes pair in all humans, these genes are symbolized by letters A, B and O.

These are only four phenotypes for the six genotypes , which are A , B , AB and O because the allel O is recessive in respect for both allels A and B .

The dominance is lacked among the two allels A and B in the genotype AB , Genotypes can be determined by following up the phenotypes of parents and offspring .

Inheritance of blood groups represents the cases of multiple allels , complete dominance and lack of dominance :

Multiple allels : There are three allelomorphic genes A, B and O ( the individual has only one pair of them ) .

Complete dominance : Both genes A and B dominate over the gene O.

Lack of dominance : The genes A and B do not dominate over each other, but they participate in the production of a new blood group , which is AB.

Two newborn are exchanged in a hospital , each of them belongs to one of the following families : 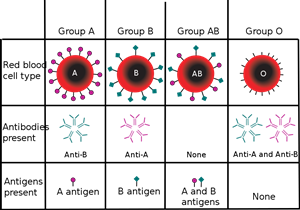 Blood groups are classified into four groups depending upon two types of chemical substances found in the blood , which are : 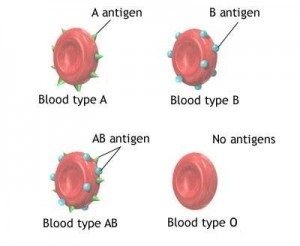 Blood can be transfused among different groups according to a special system due to the presence of antigens and antibodies .

Each group of blood has certain antigens and their corresponding antibodies that agglutinate with them, For example,  Antigens (A) are agglutinated with antibodies ( anti-a).

The type of a blood group can be determined through the reactions occur between antigens and antibodies and the occurrence of agglutination of blood , Therefore , for determining a blood group both types of antibodies ( anti-a ) and ( anti-b ) are needed .

Steps of determining of a blood group type

Two drops of blood of the person to be determining his blood group are placed separately at the ends of a glass slide , We put anti-a on the first blood drop and anti-b on the second blood drop and we separately mix each of them throughly , we observe that the blood may be agglutinated ( + ) or does not agglutinate ( – ) .

Blood group ( O ) is called universal donor because it donates blood to all blood groups as it contains no antigens A and B .

Blood group ( AB ) is called universal receiver because it receives blood from all blood groups as it is devoid of both types of antibodies ( anti-a ) and ( anti-b).