It starts from the right ventricle and ends at the left atrium , and it takes place as follows :

At the end of the circulation when the left atrium contracts , the blood will pass to the left ventricle through bicuspid valve . 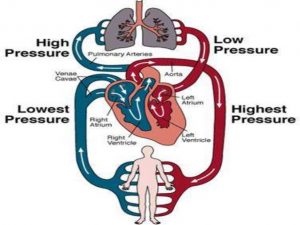 It starts from the left ventricle and ends at the right atrium , as follows :

There is a fourth blood circulation that is called the cardiac circulation which includes the movement or flow of blood inside the four chambers of heart according to the contraction and relaxation of heart .

Lymph : It is a fluid filtered from the blood plasma during its passing through the blood capillaries , It contains nearly most of the plasma constituents , in addition to a large number of leucocytes .

Lymphatic capillaries ( vessels ) : They work to collect the lymph into the circulatory system through the superior vena cava .