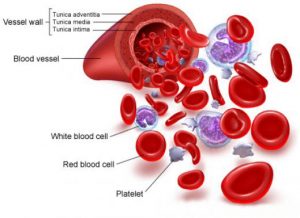 Each cell is destroyed after 120 days , They circulate about 172,000 circulations , They are destroyed in the liver , spleen and bone marrow , They are enucleated cells contain haemoglobin ( protein + iron ) which gives the blood its red colour .

The number of white blood cells is 7000 cell/mm³ , this number increases during diseases , Their shape is colourless and nucleated with many shapes , They are formed in the bone marrow , spleen and lymphatic system , some of their kinds live for 13 – 20 days .

Functions : They are produced in many types , each type with a specific function , but the main function is the protection of body against the infectious diseases through the following :

They circulate continuously in the blood vessels , attack the foreign particles , destroy and engulf them , Some of them produce antibodies .

The number of blood platelets is 250 , 000 platelet /mm³ , Their shape is non-cellular and very small in size , Their size is one fourth of the RBCs , They are produced from the bone marrow , They live for about 10 days , They play a role in blood clot after the injury .

Blood clot occurs when a blood vessel is cut , The importance of clotting : Blood forms a clot to prevent the bleeding before it leads to shock followed by death .

Factors of coagulation ( clotting ) of blood :

In case of the presence of blood clotting factors , the steps are shown as the following :

The blood platelets together with the destroyed cells from a protein called thromboplastin .

In the presence of calcium ions ( Ca++ ) and blood clotting factors in the plasma , thromboplastin activates the conversion of prothrombin into thrombin .

Where Prothrombin is a protein that is secreted in the liver with the help of vitamin K and is passed directly into the blood .

Fibrin precipitates as a network of microscopic interlacing fibers where the blood cells are aggregated , forming a clot which blocks the cut in the damaged blood vessels .

Reasons of the non-clotting of blood inside the blood vessels

Transportation : It transports the digested food substances , waste nitrogenous compounds , hormones and some enzymes ( active or inactive ) through the plasma , It transports O2 and CO2 through RBCs .

Controlling : It controls the processes of metabolism , It keeps the body temperature at 37° C , It regulates the internal environment ( homeostasis ) such as osmotic potential , amount of water and pH in the tissues .

The blood is a viscous liquid which circulates within the arteries and veins smoothly by the process of heartbeats , but to pass within the microscopic blood capillaries , it needs pressure .

The blood pressure is measured by means of mercuric instruments sphygmomanometers , There readings consist of two numbers :

Structure : a mercuric tube and a scale board .

Idea of working : blood pressure can be measured according to the elevation of mercury level inside the tube and it is represented by a number on the scale board .

The values of blood pressure are determined by listening to the heartbeats , and also between one beat and another , as the following :

on hearing the sound of heartbeat , the doctor can determine the maximum value of blood pressure , referring to the ventricles contraction ( cystolic ) .

When the sound disappears , the doctor can determine the minimum value of blood pressure , referring to the ventricles relaxation ( diastolic ) .

The blood pressure increases in arteries gradually by aging , leading to the increase of resistance against the passage of blood through them .