The brainstem is the posterior stalk-like part of the brain, it connects the cerebrum with the spinal cord, In the human brain, It is composed of the midbrain, the pons, and the medulla oblongata, It plays an important role in the regulation of cardiac and respiratory function, consciousness, and the sleep cycle.

The brainstem (or brain stem) is an important part of the brain, as the nerve connections from the motor and sensory systems of the cortex pass through it to communicate with the peripheral nervous system.

External features of the medulla oblongata 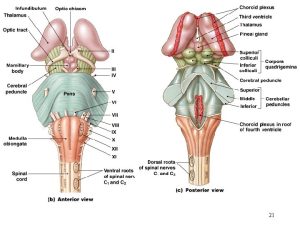 A. The ventral surface presents the following features

B. The dorsal surface presents the following features

The ridge lateral to the cuneate tubercle is the inferior cerebellar peduncle, The area between the two inferior cerebellar peduncles forms the lower part of the floor of the fourth ventricle, This area is triangular in shape and is bounded above by the stria medullaris, This area presents an inverted V-shaped depression called inferior fovea which divides it into three trigones from medial to lateral:

External features of the pons

A. The ventral surface presents the following features:

B. The dorsal surface presents the following features:

External features of the midbrain

A. The cerebral peduncle is differentiated into 3 parts

This is the smaller dorsal part of the midbrain, The tectum is formed of four knob-like elevations called colliculi or corpora quadrigemina, They are arranged as two superior and two inferior colliculi, Each colliculus gives rise to a brachium from its lateral side, The superior brachium connects the superior colliculus with the lateral geniculate body.

The inferior brachium connects the inferior colliculus with the medial geniculate body, The transverse sections of the brainstem at its different levels are correlated to the shape and size of grey and white matter in these levels.

It is a rhomboidal space at the junction of the midbrain and the base of the cerebrum.

Cranial nerves can be classified into:

Deep origin and functional types of cranial nerve nuclei are represented in: