Green plastid ( Chloroplast ) appears under the light microscope as a homogeneous mass , having the shape of a convex lens , After studying the green plastid under the electron microscope , it was found that it consists of Double thin external membrane , Matrix ( Stroma ) , Starch granules and Grana .

Green plastid consists of : Double thin external membrane & its thickness is about 10 nm , Matrix ( Stroma ) is a colourless protein substance .

Starch granules are large in number , They are small in size and a temporary products of the photosynthesis process as they will soon change back into a soluble sugar to be translocated under certain conditions to other organs of the plant .

Grana are located in the stroma , They have disc-shaped structures , each granum is about 0.5 micron in diameter and about 0.7 micron in thickness , Each granum is a pile ( mass ) of 15 hollow discs or more that are arranged above each other .

The margin of some discs of a granum extends to meet the margin of another disc in the neighbouring granum to increase the surface area of grana that are exposed to the light , They contain the pigments which absorb the light energy needed for photosynthesis . 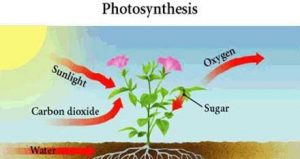 The green colour dominates over the other colours of pigments due to the high ratio of the chlorophyll pigments .

It is believed that there is a relation between the presence of Mg atom in the centre of chlorophyll molecule and the ability of chlorophyll to absorb light .

Structure of the leaf

Examination of T.S. passing through the midrib of a dicotyledonous plant leaf , the leaf consists of three main tissues which are upper and lower epidermis , Mesophyll tissue and vascular tissue .

Each of the upper and lower epidermis consists of one row of adjacent barrel-shaped parenchyma cells with no chlorophyll , Stomata spreed throughout the epidermal layer , the external wall of epidermis is coated by a layer of cutin , except the stomata .

It lies between the upper and lower epidermal layers and is transversed by veins , It consists of two layers which are palisade layer and spongy layer .

Palisade layer is perpendicular to the upper epidermis of the leaf surface , It consists of one row of cylindrical and elongated parenchyma cells , It possesses many chloroplasts ( especially in the upper part of cells ) to receive the highest light intensity .

Spongy layer is located below the palisade tissue , It consists of irregular-shaped and loosely-arranged parenchyma cells with wide intercellular spaces , The cells of this tissue contain a lower number of chloroplasts than the cells of palisade tissue .

Phloem : It lies toward the lower epidermis , It translocates the dissolved organic food from the mesophyll where it has been manufactured to the other parts of plant .

Green and purple sulphur bacteria are autotrophic as they contain bacteriochlorophyll which is simpler in structure than the normal chlorophyll .

They live in swamps and ponds , because hydrogen sulphide is abundant which is the source of hydrogen used by these bacteria to reduce CO2 in order to build up carbohydrates and sulphur is released .

The resulted hydrogen was used in certain dark reaction to reduce CO2 into carbohydrates .

So , the general equation for photosynthesis in sulphur bacteria is :

The resulted hydrogen was used in certain dark reactions to reduce CO2 into carbohydrates .

So , the general equation for photosynthesis in green plants is :

Consequently , Van Neil proposed that : the released of oxygen comes from water in the green plants , a case which is similar to sulphur that is released from hydrogen sulphide by the sulphur bacteria .

To confirm that water is the source of oxygen gas that is evolved from the photosynthesis process , In 1941 , a group of scientists at California University verified the theory of Van experimentally by using a green agla called Chlorella and provided it with all conditions favourable for photosynthesis , The result : The source of evolved oxygen from photosynthesis is water and not CO2 gas .

Light and dark reactions of the photosynthesis process