Light and dark reactions of the photosynthesis process

Light reactions is a group of reactions that occurs in the granum inside the green plastid , as it contains the chlorophyll pigments and the light is the limiting factor for the rate of photosynthesis .

Light falls on the chlorophyll of grana inside the chloroplast , some electrons in the atoms of chlorophyll will gain energy , these excited electrons are shifted up from their low-energy levels to the higher ones .

When the stored potential chemical energy is released , the electrons fall once again to the lower energy levels and the chlorophyll will return to the stable state , ready for another influence of light to become excited once more . 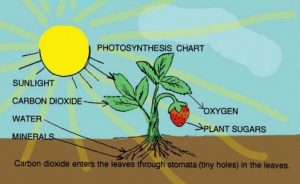 Part of the energy released from the chlorophyll is used in splitting up the water molecule into hydrogen and oxygen , where : hydrogen combines with a co-enzyme present in the chloroplast ( NADP ) to give NADPH2 , in this way hydrogen will not escape or recombine with oxygen again , Oxygen is released as a secondary product .

The other part of energy from the excited chlorophyll is stored in ATP molecule ( energy currency in the cell ) by the combination of ADP molecule ( which is present in chloroplast ) with a phosphate group ( P ) by means of a high-energy bond marked by a squiggle ( ∼ ) , this process is called photosynthetic phosphorylation .

ATP : Adenosine TriPhosphate that carries the energy to the dark reactions .

Dark reactions ( Enzymatic reactions ) is a group of reactions that occurs in the stroma of chloroplast in which the temperature is the limiting factor for the rate of photosynthesis , so , these reactions can occur in both the light and darkness .

In these reactions , hydrogen carried on NADPH2 is used to fix CO2 gas by reducing it into carbohydrates with the help of energy stored in ATP molecules .

Malvin Calvin and his associates at California university revealed in 1949 , the nature of dark reactions by using the newly discovered radioactive isotope of carbon 14C .

A 3-carbon compound was formed which is PGAL , phosphoglyceraldehyde , This is :

Calvin also pointed out that the synthesis of hexose sugar ( glucose ) is not completed in one step , but through out several intermediate reactions catalyzed by certain specific enzymes .