In the human body, there are two main control systems: the endocrine system and the nervous system, both coordinate the functions of various systems in order to maintain homeostasis. The endocrine system exerts a relatively slow control, through secreting hormones, which regulate growth and metabolic processes within the cells.

Functional organization of the nervous system

The nervous system is composed of two major parts or subdivisions: 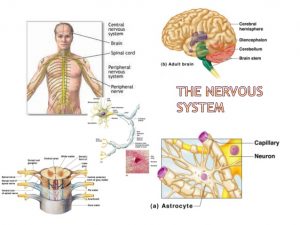 The brain consists of many parts that function as an integrated system. The major parts are the cerebrum (cerebral cortex), cerebellum, basal ganglia, brain stem (midbrain, pons, and medulla), the thalamus, and the hypothalamus.

In cross-section, the spinal cord shows a central butterfly-shaped area of grey matter with 3 projections called horns: dorsal, lateral, and ventral, The grey matter is surrounded by white matter, which consists of groups of myelinated axons.

It is an unavoidable beneficial inborn response brought about by a stimulus (a sudden change of the external or internal environment.

Reflex Arc is the pathway of reflex action. It consists of 5 different components:

The autonomic nervous system (ANS) is the part of the nervous system that is responsible for homeostasis, the Autonomic motor nerves innervate the organs whose functions are not usually under voluntary control.

Divisions of the autonomic nervous system

As previously mentioned, the peripheral efferent portions of the autonomic nervous system are made up of preganglionic and postganglionic neurons.

The sympathetic chain contains one ganglion for each segmental nerve, except in the cervical region, where individual ganglia become variably fused to form three ganglia: the superior, middle, and inferior cervical ganglia.

Collateral ganglia lie between the sympathetic chain & the organ of supply. They are the site of the relay of the preganglionic sympathetic fibers that supply the abdominal and pelvic viscera.

Functions of the autonomic ganglia

The ganglia act as distributing centers:

Site of relay: Autonomic ganglia are stations for relay of preganglionic fibers coming from CNS.

Site of release of chemical transmitter: Acetylcholine is the mediator liberated at all preganglionic endings (sympathetic and parasympathetic). It is responsible for the transmission of the nerve impulse from preganglionic to postganglionic neurons (synaptic transmission).