Application 1: The coordinate bond formed in the ammonium ion (NH4)+

Ammonia gas dissolves in water forming a coordinate bond between:

Acids dissolve in water forming a coordinate bond between:

There are no positive hydrogen ions (protons) in aqueous solutions of the strong acids, Because of their bonding with water molecules by coordinate bonds forming hydronium ions (H3O+).

Ammonium hydroxide molecule (NH4OH) contains three types of the bonds because it contains:

Physical bonds are the hydrogen bond and the metallic bond. 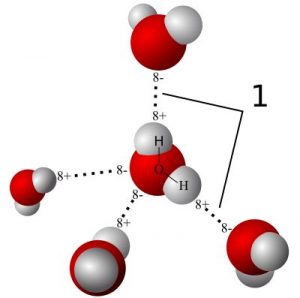 It is known that water boils at 100° C, This temperature is considered to be high for a compound of a relatively low molecular mass (18 g/mol).

If this temperature is compared with the boiling point of hydrogen sulphide (of molecular mass 34 g/mol) which is – 61° C, we will find a great difference although oxygen precedes sulphur in the same group 6A in the periodic table.

The high boiling point of water, due to the consumption of a big amount of heat energy to break the hydrogen bonds between water molecules.

The strength of hydrogen bond

The hydrogen bonds between hydrogen fluoride molecules (HF) are stronger than that between water molecules, Because the difference in the electronegativity between fluorine & hydrogen is greater than that between oxygen & hydrogen, the strength of the hydrogen bond increases as the difference in the electronegativity between the bonded atoms increases.

The hydrogen bond between H2O molecules is stronger than that between NH3 molecules, Because the difference in the electronegativity between nitrogen & hydrogen atoms, In addition, the hydrogen bonds in water molecules are in a straight line with the polar covalent bond.

The forms of the compounds which have hydrogen bonds

Each metal has a crystal lattice with a definite form in which the positive metal ions take a certain arrangement, The outermost shell electrons (valence electrons) of each atom are associated together forming an electron cloud with free movement to bind this great collection of positive metal ions by what is known as a metallic bond.

The metallic bond is the bond produced from the electron cloud of valence electrons which decreases the repulsive forces between the positive metal ions in the crystal lattice, These free valence electrons account for the good electrical and thermal conductivity of metals.