Octet rule: With the exception of hydrogen, lithium & beryllium, the atoms of all elements tend to reach the octet structure of the nearest inert gas.

The inadequacies of octet rule

The bonding in many molecules can’t be explained on the basis of the octet rule as in:

Phosphorus pentachloride molecule PCl5, Because the phosphorus atom is surrounded by ten electrons.

Boron trifluoride molecule BF3, Because the boron atom is surrounded by only six electrons.

The simple representation of the covalent bond as being just a shared pair of electrons is not sufficient to explain many of the properties of molecules such as the stereostructure and angles between bonds.

This theory was based on the conclusions of quantum mechanics that consider the electron not only as a negative particle that moves in a definite orbit but as a material particle with wave property which can exist in any position in the space surrounding the nucleus.

This theory explains the formation of the covalent bond as a result of the overlap of an atomic orbital of one atom which contains a single electron with a similar orbital of another atom, The valence bond theory depends on two main concepts which are: Overlapped orbitals concept & Hybridized orbitals concept.

The valence bond theory: The covalent bond in the molecule results from the overlap of some atomic orbitals in the combined atoms and the rest of the atomic orbitals which didn’t take part in the formation of bonds remain as they were in the free atoms. 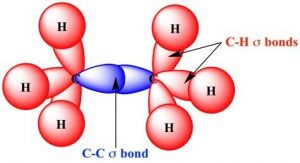 Application 1: The formation of hydrogen molecule according to the concept of the overlapped orbitals.

Application 2: The formation of hydrogen fluoride according to the concept of the overlapped orbitals.

It is clear from the electron configuration of carbon that the ground state of carbon atom has only two electrons in a single state in 2p orbital.

However, according to the overlapped orbital concept, the carbon atom is bonded with two hydrogen atoms by two covalent bonds from the type of (C − H), in this way the formula of methane molecule is – postulated – CH2 and its bond angle equals 180°.

But, on studying the bonds in methane – actually – it is found that the carbon atom is bonded with four hydrogen atoms by four symmetrical bonds in length & strength and the molecule takes the tetrahedron shape and the angles between its bonds = 109.5°.

But another problem is shown, the non-equivalence of the four (C − H) bonds because the electron of the 2s orbital differs from the three electrons of the three 2p orbitals in energy and in the sterostructure of the orbitals, So, the valence bond theory couldn’t explain the structure of methane molecule in the light of the overlapped orbitals concept.

To solve the problem of the unsymmetry of the four orbitals in the excited carbon atom, there must be a further chance that occurs to the atomic orbitals in the carbon atom resulting in the formation of four equivalent orbitals known as hybridized orbitals, This process is termed by hybridization.

Hybridization is the process of the overlapping between two different orbitals or more of the same atom to produce a number of new equivalent orbitals called hybridized orbitals.

The conditions of the hybridization process:

Some of the hybridization type

The hybridization type is sp3: s orbital overlaps with three of p orbitals forming four hybridized orbitals, each of them is named sp3 hybrid orbital.

The hybridization type is sp2: s orbital overlaps with two of p orbitals forming three hybridized orbitals, each of them is named sp2 hybrid orbital.

The hybridization type is sp: s orbital overlaps with one of the p orbitals forming two hybridized orbitals, each of them is named sp hybrid orbital.

The excitation process takes place when the carbon atom acquires a given amount of energy, then the carbon atom is said to be in an excited state, The four orbitals 2s, 2px, 2py and 2pz are hybridized forming four hybrid orbitals, where each of them is named sp3 and contains one single electron.

To overcome the repulsive forces between the orbitals, they are directed apart in space as far as possible till the angles between the hybrid orbitals become 109.5°, then they will be more stable (less repulsive).

Sigma bond: The bond that is formed as a result of the overlap of two atomic orbitals along an axis by head to head, It is stronger than pi bond, The overlapped orbitals are on one line or collinear overlap.

The pi bond (π): The bond that is formed as a result of the overlap of two atomic orbitals side by side, The overlap is between two parallel orbitals or collateral overlap.