Corrosion is the electrochemical process in which metals oxidize (lose electrons), it damages 25% of total world yield of iron per year, Corrosion of most industrial metals such as iron and steel is caused by the presence of different impurities, where the contact between the less active metal and the more active metal leads to the formation of a galvanic cell that consists of:

When a piece of iron is exposed to scratching or cracking, a galvanic cell will be formed (iron anode-carbon and impurities cathode and water that contains some ions will be the electrolyte), The electrolyte is the water which contains dissolved ions and the anode is iron.

The electrolyte is the water which contains dissolved ions  Fe2+ combines with OH− to form iron (II) hydroxide Fe(OH)2.

Fe(OH)2 will be oxidized by oxygen dissolved in water to iron (III) hydroxide.

By the addition of the previous equations, we obtain the total equation for cell corrosion of iron.

The rust is a slow process due to the presence of limited amounts of ions in water and it increases if a big amount of ions exists in water as seawater. 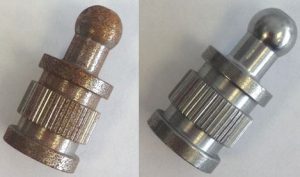 The factors that cause corrosion

These factors can be classified into two kinds:

Factors specific to the metal itself

Heterogeneity of alloys: The metals used in industry mostly exist as alloys which are difficult to be prepared in homogenous structure, so, a large number of local cells are formed which cause corrosion of the more active metal, Some of the alloys are heterogeneous which form endless number of galvanic cells causes corrosion to the most reactive metal in the alloy.

The connection of metals with each other: at points of welding metals together or using screws made from another metal, this causes the formation of local galvanic cells causes corrosion of the most active metal, as in the contact between aluminum and copper, aluminum is corroded firstly and the contact between iron and copper, iron is corroded firstly.

The external factors (factors specific to the surrounding)

Water, oxygen and salts are considered from the external factors that cause metal corrosion.

The electrochemical mechanism for corrosion of iron

The iron metal and water which contains dissolved ions constitute a galvanic cell in which iron is oxidized to Fe2+ in a region of the surface (anode region) remote from atmospheric O2 and O2 is reduced near the edge of the water at another region of the surface (cathode region), electrons flow from anode to cathode through the metal which acts as an external circuit, while ions flow through the water which acts as an electrolytic solution, Dissolved O2 oxidizes Fe2+ further to Fe3+ before it is deposited as rust Fe(OH)3.

Protection of metal against corrosion

Painting iron by the organic material like oil or varnish or primer, Covering iron by corrosion resistant metals like in steel galvanization process by dipping steel in molten zinc, also magnesium is used to protect steel used in ship industry and tin is used to protect iron that used in cans.

Cathodic protection (cathodic cover): If the protective element is less active (Like tin) than the original element (Like iron) a galvanic cell is formed in which iron becomes more active metal and anode while tin becomes less active and the cathode, so, iron corroded, therefore, iron that plated with tin corroded on scratching faster than iron.

Cathodic protection involves coating the base metal by another less active metal, It protects the underlying base metal due to its noble character and higher corrosion resistance, Reduction potential of the protective metal is higher than that of base metal, If scratching occurs in coating layer, the base metal is corroded, such as coating of iron with Sn.

Anodic protection (Anodic cover): Covering the metal by another more active metal such as plating iron by zinc (iron galvanization) where Zn precedes iron in the electromotive series, then galvanic cell is formed in which Zn acts anode, so, it is corroded completely first before starting of iron corrosion which takes a long time as iron corrosion begins at its surface.

As ships chassis are continually in contact with salty water and also iron pipes which are buried in moist soil, so, they are exposed more to corrosion, and can be protected by connecting them to the more active metal than iron like Mg which acts as anode, in this case Mg is corroded instead of iron and called sacrifying electrode.