Preparation of nitrogen gas in the lab

Then it is passed through conc. sulphuric acid, To absorb water vapor, Finally it is passed over red hot copper turnings, To remove oxygen gas, Nitrogen is collected over mercury surface to get dried.

From the chemical compounds: By dropping sodium nitrate solution slowly on ammonium chloride solution with heating, Nitrogen gas is collected during its preparation by downward displacement of water, because nitrogen gas is lighter than water and sparingly soluble in it.

The properties of nitrogen

The reactions of nitrogen gas with the other elements occur in the presence of an electric spark (550° C) or an electric arc (3000° C) or by strong heating, Because of the difficulty of breaking the triple bond between the two nitrogen atoms in one molecule of it.

The reaction of nitrogen with the other elements

The reaction of nitrogen with Hydrogen (H2): In the presence of an electric spark (550° C), ammonia gas (NH3) is formed.

The reaction of nitrogen with oxygen: In the presence of an electric arc (3000° C), nitric oxide (NO) gas is formed which is instantly changing into (oxidized) nitrogen dioxide (NO2).

The reaction of nitrogen with metals: At high temperature, nitrogen reacts with metals like magnesium giving the metal nitride which easily decomposes in water and ammonia gas evolves.

The reaction of nitrogen with calcium carbide (CaC2): In the presence of the electric arc (3000° C), calcium cyanamide (CaCN2) is formed which is used as a fertilizer.

Calcium cyanamide is used as a fertilizer because it reacts with water and produces ammonia gas in the agricultural soil when the land is being irrigated.

The most famous nitrogenous compounds

Preparation of ammonia in the lab

Put in the flask, a mixture of ammonium chloride NH4Cl and calcium hydroxide (slaked lime) Ca (OH)2, Put a drying agent (quicklime CaO) in the U-shaped tube, Heat the contents of the flask, then collect the ammonia gas by downward displacement of air.

Ammonia gas is collected by downward displacement of air, Because it is lighter than air, Conc. sulphuric acid is not used in drying ammonia gas when it is prepared in the lab, Because it reacts with ammonia gas, producing ammonium sulphate.

Preparation of ammonia gas in the industry (Haber-Bosch’s method)

The scientists Haber-Bosch had reached a method to prepare ammonia gas in the industry from nitrogen and hydrogen, in the presence of a catalyst (iron, molybdenum), under 200 atmospheric pressure and 500° C.

The properties of ammonia gas 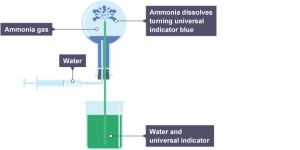 Ammonia gas is considered as a base anhydride because it reacts with water forming ammonium hydroxide (a weak base).

Ammonia gas forms dense white fumes of ammonium chloride (solid substances that sublimate) when subjected to a glass rod wetted with conc. hydrochloric acid, Sublimation is the change of the matter from a solid state to a gaseous state directly without changing into a liquid state.

The role of ammonium in the manufacture of fertilizers

Nitrogen is present in soil in the form of inorganic & organic substances, it is considered one of the main sources of nutrition in plant, Because it is an essential element to form protein, However, the amount of nitrogen in the soil decreases by time, so, the soil should be enriched by nitrogen either by adding Synthetic nitrogenous fertilizers or natural fertilizers (manure).

Although nitrogen forms about 4/5 of the air volume, plant can’t use it by a direct way in its gaseous form, Accordingly, it must provide the soil by nitrogen in the form of ammonium salts or urea which dissolve in the irrigation water, where they absorbed by the plant roots, Ammonia is considered the essential starting material for manufacturing most of the nitrogenous fertilizers & nitrogenous phosphorus fertilizers.

The inorganic nitrogenous fertilizers (ammonium salts) are synthesized by a neutralization reaction between ammonia and the suitable acid.

Some of the important inorganic nitrogenous fertilizers:

Properties: It has a high nitrogen content (35 %), It is highly soluble in water, Using an excess amount of it, causes an acidic effect on the soil.

Properties: The continuous use of it, causes an increase in the acidity of the soil, thus it is important to neutralize the soil by basic substances.

They are prepared by reacting ammonia with phosphoric acid.

Nitrogenous phosphorus fertilizers (Ammonium phosphate) is an important fertilizer because it provides the soil with two essential elements which are nitrogen and phosphorus.

Notes of some common fertilizers

Urea fertilizer: It has high nitrogen content (46%), It is the most suitable fertilizer for hot areas because the high temperature increases its dissociation to ammonia and carbon dioxide.

Anhydrous liquified ammonia fertilizer (future fertilizer): It has the highest nitrogen content overall fertilizers (82 %), it is supplied to the soil in a depth of nearly 12 cm.