Group 5A (group 15) consists of five elements which are nitrogen, phosphorus, arsenic, antimony & bismuth, Elements of this group are not abundant in nature, except nitrogen which represents about 80 % of atmospheric air (4/5) of air volume, We can’t detect both nitrogen & phosphorus by flame test, because both of them are nonmetals. 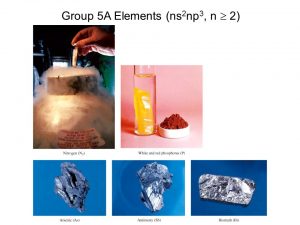 The forms of these elements which are found in nature:

The properties of group 5A elements graduate regularly depending on the increase in atomic number and atomic size as illustrated in the following:

The graduation of the metallic and nonmetallic property

The metallic property increases by increasing the atomic number (downward the group), The properties of this group elements tend to be those of the nonmetals, even bismuth – is a metal – but its ability to conduct electricity is weak.

Different number of molecules atoms of each element

The number of molecule atoms of each element of this group differs as the following:

Elements of this group are characterized by having several oxidation numbers in their different compounds from (− 3) to (+ 5), because through covalent sharing they may gain till 3 electrons or lose till 5 electrons, The oxidation numbers of nitrogen in some of its compounds: 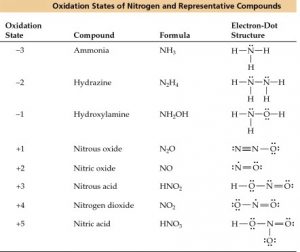 Oxidation numbers of nitrogen in some of its compounds

Allotropy exists in phosphorus, but not in nitrogen and bismuth because phosphorus is a solid nonmetal, while nitrogen is a gaseous nonmetal and bismuth is a metallic element, in which gases and metals do not have allotropic forms.

Oxides of group 5A elements

Hydrides of group 5A elements

Most of the elements of this group react with hydrogen forming hydrides, the oxidation number of the element is −3, as in Ammonia NH3, Phosphine PH3, Arsine AsH3.

Based on that the basicity of the hydride depends on the ability of its central atom to lose one pair of electrons or gain a proton from another substance, ammonia is more basic than phosphine.

The properties of hydrides of the group 5A elements:

The most famous elements in 5A group (Nitrogen properties, Preparation & compounds)