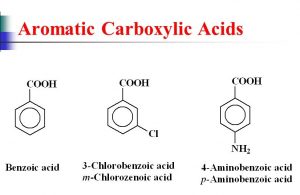 The organic acids in our life

Formic acid (HCOOH) is the acid which is secreted by ants to defend themselves, It is used in the manufacture of dyes, insecticides, perfumes, drugs and plastics.

Acetic acid CH3COOH (pure 100%) is colourless liquid, corrosive to skin and it has a pungent odour, It freezes at 16°C forming solid substances as ice, therefore it is called glacial acetic acid (100% concentration), and it is used in esterification reactions to prevent the reversible reactions.

Acetic acid of concentration 4% is used as vinegar in homes, It is considered as a starting material for the synthesis of many organic products such as synthetic silk, dyes, insecticides and food additives.

Benzoic acid (C6H5COOH) is sparingly soluble in water, It is converted to its sodium or potassium salts to become soluble in water and to be easily absorbed in the human body, sodium benzoate of concentration 0.1% is used as a preservating substance for foods because it prevents the growth of fungi on foods.

Citric acid is found in fruits, its percent is (5–7%) in lemon and 1% in orange, It prevents the growth of bacteria in foods because it decreases their (PH), It has many industrial uses, and it is added to fruits to retain their colour and taste.

Ascorbic acid “vitamin (C)” is found in acidic substances like fruits, vegetables and green pepper, it decomposes by heat and the effect of air, Lack of vitamin C leads to deterioration of some biological functions in the human body and the infection with (Escarpot) disease, from its symptoms, bleeding of gum and joints swelling.

The human body needs vitamin C in small quantities, The fruits and some vegetables are eaten fresh without cooking because ascorbic acid (vitamin C) found in them is hydrolyzed by heat.

Salicylic acid is used in the manufacture of cosmetics specific to skin because it makes it softer, flexible and protect it against sun rays, and It is used in the elimination of skin warts and acne, It is also used in preparation of Aspirin and Marookh, It was used in the treatment of cold diseases and headache since 1829, before using Aspirin, but it caused bleeding of stomach.