What is the meiotic division? 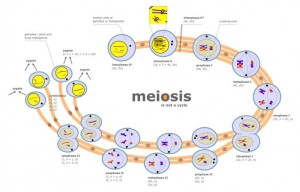 It produces two cells, Each of them contains half the number of chromosomes, The phases of first Meiotic division are Prophase I, Metaphase I, Anaphase I, and Telophase I.

Prophase I: It is very important to know that in this phase, the chromatin reticulum condenses (intensifies) and appears in the form of distinct chromosomes, The chromosomes are arranged in homologous pairs, Each pair consists of 4 chromatids which are called a tetrad.

The crossing over phenomenon occurs, The nuclear membrane and the nucleolus disappear, Each two homologous chromosomes (in the tetrad) move away from each other, The spindle fibres appear and connect to the chromosomes at the centromere.

Metaphase  I: It is very important to know that in this phase, The chromosomes pairs arrange at the cell equator.

In Telophase I, The spindle fibers disappear, The nuclear membrane is formed around the chromosomes, at each of the cell’s poles leading to the formation of two nuclei, Each nucleus contains half the original number of parent cell chromosomes, Each cell contains (N) chromosomes.

The crossing over phenomenon

The traits are different between the members of the same species due to the crossing over a phenomenon which is a phenomenon that takes place at the end of prophase I and in which some parts of the two inner chromatids of each tetrad are exchanged to produce new genetic arrangements.

The crossing over phenomenon works on the variations of genetic traits among the members of the same species, where it contributes to the genes (that carry the genetic traits) exchanging between the two homologous chromosomes‘ chromatids and distributing them randomly in the gametes.

Each cell of the two cells resulted from the first meiotic cell division is divided in a way similar to the mitotic cell division, In the final phase (Telophase II) of this division, four cells (four gametes) are produced and each of them contains half the number of the chromosomes of the parent cell.

Meiotic cell division is called by reduction division because the produced cells contain half the number of chromosomes of the parent cell.