Pale Moon browser is an open-source web browser with an emphasis on customization; It originated as a fork of Firefox but has subsequently diverged, The main differences are the user interface, add-on support, and running in single-process mode, its motto is “Your browser, Your way”, There are official releases for Microsoft Windows and Linux, as well as contributed builds for various platforms.

Pale Moon retains the highly customizable user interface of the Firefox version 4–28 era, It continues to support some types of add-ons & plugins that are no longer supported by Firefox, including NPAPI plugins such as Adobe Flash Player, as well as legacy Firefox extensions.

Although Pale Moon is open source and the source is supplied under the Mozilla Public License, redistribution of the Pale Moon binaries (executable form) is limited by certain conditions under a proprietary license by Moonchild Productions, as permitted under 3.2b of the MPL v2.0.

Although Pale Moon is supplied as open source, our branding included in the source tree is protected and you are not granted any rights or licenses to the Pale Moon name, logo, or other identifying official branding marks, names or phrases. 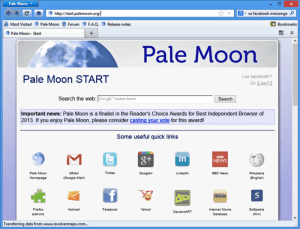 You can charge for redistribution rights of the browser binaries, yourself (you have no rights to it), You charge for a physical medium like a CD or DVD. You don’t require personal data (name, e-mail, telephone number, address, age, gender, ID, or similar) to download the binaries, The binaries are packaged in “bundle” archive formats.

Pale Moon’s source code is released under Mozilla Public License 2.0 except for parts relating to branding, To ensure quality, redistribution of the officially branded Pale Moon binaries is permissible under specific circumstances.

Moonchild Productions presents Pale Moon for modern iterations of the Microsoft Windows and Linux operating systems, An SSE2-capable processor is required to run the official Pale Moon releases, Pale Moon for macOS is supported in part by community contributions to the Pale Moon and UXP codebases, Since March 2021, macOS is no longer supported.

The official support for Windows XP ended with Pale Moon 25.0.0, Pale Moon for Android was a distinct development effort that is no longer maintained, First released in 2014, it was announced the following year that this Pale Moon variant would likely be abandoned due to lack of community involvement, The final release was 25.9.6.

Pale Moon has diverged from Firefox in a number of ways: Pale Moon uses the pre-Australis user interface (“Strata”) as carried by Firefox during versions 4-28, Pale Moon supports extensions built with XUL and XPCOM, which are no longer supported by Firefox.

Pale Moon supports “Complete Themes”, add-ons that can customize the entire UI of the browser, Firefox no longer supports this and retains limited options for UI customization.

Pale Moon supports NPAPI plugins indiscriminately, all of which are no longer supported by Firefox, Pale Moon replaces the Gecko browser engine with the Goanna fork, Pale Moon runs in single-process mode, but Firefox became a multi-process program.

Pale Moon is built upon the Unified XUL Platform (UXP), the cross-platform, multimedia application base with ancestry in Mozilla code, It includes the Goanna layout and rendering engine, the fork of Mozilla’s Gecko engine, and Moonchild Productions develops UXP alongside Pale Moon, UXP is the fork of the Firefox 52 ESR platform, created in 2017 to address the imminent death of XUL/XPCOM technology in the Firefox codebase.

The benefits of using UC Browser HD 3.0 on your big screen mobile