The toxic chemicals are the substance that can be poisonous or cause the health effects, They don’t break down easily in the environment, they can build up the tissues of small organisms, they can move up through the food chain.

The chemicals can be toxic because they can harm us when they enter or contact the body, they can threaten human health, The motor vehicle emissions of nitrogen and sulphur oxides cause acid rain which poisons the fish and other aquatic organisms in the rivers and lakes.

Carbon dioxide gas causes the greenhouse effect and climate change, Chlorofluorocarbons (CFCs) cause the destruction of ozone in the stratosphere and they create the possibility of serious environmental damage from ultraviolet radiation.

The oil drilling and transport, mining, and maritime operations all result in the accidental introduction of toxic materials into the marine environment, and the leakage from the storage tanks and the pipelines, and the seepage from the waste dumps. 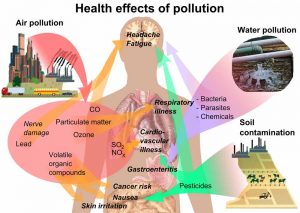 The toxic materials or substances can poison people and other life, they can cause illness and even death if swallowed or absorbed through the skin, where the pesticides, the weed killers, and many household cleaners are toxic, they occur as a result of a variety of human activities.

The industries and the sewage treatment plants discharge the wastes which contain the toxic substances directly into the waterways, These direct pipeline discharges are called the point sources.

The fuel combustion from means of transports and the power plants contain numerous chemicals that drift in the atmosphere and rain down upon or absorb into the surface of the ocean and other bodies of water.

The toxic chemicals can be found in our soil, the water, the air, and bodies, This contamination has seriously affected the health of humans and wildlife everywhere.

The disinfecting products are flushed into the sewage systems and out through the treatment plant discharge, and they are washed from the houses and the septic tanks into the groundwater and the streams.

Effects of some toxic chemicals

Arsenic is a potent poison, Many water supplies close to mines are contaminated by it,  Arsenic causes harm by disrupting metabolism at the cellular level, and Arsenic can cause fetal death and malformations in many mammal species.

Cadmium can be toxic to the freshwater organisms, The shellfish can concentrate cadmium in levels that are harmful to people who eat them,  zinc can kill young salmon as they swim out of their nest gravel, It can kill many adult fish species.

Many petrochemicals can poison the fish, and kill their eggs and larva, they are toxic to the algae and the invertebrates, and they can cause changes in the metabolism, reduced feeding, and poor shell formation,  They can reduce the reproductive success of invertebrates.

The petrochemicals can damage the skin, the lungs, the liver, and the kidneys of birds and mammals as well as they increase vulnerability to deadly infections by suppressing the immune system, they can damage the plants, and they stop seed germination.

The pesticide DDT builds up in the food chain and can last for decades in the environment, DDT is linked to the decline of the bald eagle, the peregrine falcon, and other birds because it makes their eggshells too thin, and decreasing the survival of the chicks.

Mercury is very toxic, It is mostly known as a neurotoxin which means that it harms the brain and nervous system, and it is linked to kidney and liver damage and possibly cancer.