Carbon monoxide (CO) is a common, potentially lethal gas produced by the incomplete combustion of fossil fuels such as natural or liquefied petroleum gas, oil, wood, and coal, It is one of the oldest documented toxicants, You may be exposed to carbon monoxide by using poorly maintained or unvented heating equipment, improperly vented natural gas appliances like stoves or water heaters & running vehicles.

It is a colorless, odorless, tasteless, and toxic air pollutant, The largest anthropogenic source of CO is vehicle emissions, Breathing high concentrations of carbon monoxide leads to reduced oxygen (O2) transport by hemoglobin and has health effects that include headaches, increased risk of chest pain for the persons with heart diseases.

Carbon monoxide is a toxic gas that you cannot see or smell, CO is given off whenever fuel or other carbon-based materials are burned, vehicle emissions increase unhealthful ambient CO concentrations, but with the introduction of emissions controls, particularly automotive catalysts, estimated CO emissions from all sources decreased by 21%, The locations that continue to have high concentrations of CO contain high pollution.

When the engines and vehicle emissions-control equipment operate less efficiently, The combustion is less complete, and catalysts take longer to become fully operational, So, The products of incomplete combustion are formed in higher concentrations (including CO). 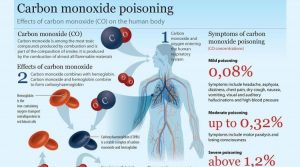 Carbon monoxide is a dangerous, poisonous substance if the people are exposed to it in high quantities, The industrial processes where carbon monoxide may be produced include metal manufacturing, the electricity supply, mining metal ore and coal, food manufacturing, extracting oil and gas from land or sea, The production of chemicals, cement lime, plaster and concrete manufacturing, and petroleum refining.

Industrial plants emit carbon monoxide through the combustion of natural gas, coal and coke too, There are many other sources of carbon monoxide include the internal combustion engines of chainsaws and leaf blowers, as well as charcoal heaters, such as barbeques, wood stoves, gas water heaters, gas stoves, fuel-fired heaters, fireplaces, and gas dryers.

Carbon monoxide can occur naturally in the environment, It is released into the atmosphere by volcanoes as they erupt, from the smoke of forest fires, from the natural gases in coal mines, and from lightning, Other natural sources of carbon monoxide are marsh gases, which are called methane and produced by plants decomposing underwater, marine algae, kelp & seed germination growth.

You may be exposed to unsafe levels of carbon monoxide by running generators or gas-powered tools or vents, cooking with a charcoal or gas grill, using a propane camp stove, When carbon monoxide is emitted into the atmosphere, it affects the amount of greenhouse gases which are linked to climate change and global warming, This means that land and sea temperature increases changing to ecosystems, increasing storm activity and causing other extreme weather events.

People are exposed to carbon monoxide by breathing in contaminated air, Using equipment that has not been maintained, or is not working properly, Smoking, or breathing of other people’s cigarette smoke, Living near industries that emit carbon monoxide, or near freeways and busy roads, Using non-electric heaters, like wood heaters, Working in a job where carbon monoxide is produced or used.

The people are at risk of CO poisoning, Unborn babies, infants, the elderly, and people with chronic heart disease, anemia, or respiratory problems are generally more at risk than others, Breathing CO can cause a headache, dizziness, vomiting, and nausea, If carbon monoxide levels are high enough, you may become unconscious or die.

Carbon monoxide is a toxic component of industrial emissions, exhaust and cigarette smoke, carbon monoxide starves our cells of oxygen by replacing oxygen molecules in the blood, Exposure to carbon monoxide can have fatal consequences, when blood vessels are blocked, such as during heart attack or stroke.

Carbon monoxide (CO) and carbon dioxide (CO2) are two different gases, Both gases are a combination of carbon and oxygen, When combustion of carbon is complete, which requires the presence of sufficient oxygen (plenty of air) the result is carbon dioxide, The combustion refers to “the chemical combination of the substance with oxygen” and does not always, but sometimes, involve fire and flames.

When the combustion of carbon is incomplete, which happens when there is a limited supply of air, only half oxygen adds to the carbon and instead carbon monoxide is formed, packaged carbon monoxide is used in many industries including metal fabrication, in the manufacture of chemicals, for the reduction of ores in the manufacture of metal carbonyls, in the pharmaceutical industry and in electronic and semiconductor applications.

The “incomplete” combustion of coal, natural gas, and oil is a known environmental source of carbon monoxide, Low levels of oxygen & low temperatures cause the formation of higher percentages of CO in the combustion mixture, The internal combustion engine is the main source of workplace exposure to carbon monoxide in industrial settings, Many furnaces & ovens produce large amounts of the gas, especially when they are not properly maintained.

Carbon dioxide gas is produced during some fermentation processes such as wine-making, Natural sources account for the majority of CO2 released into the atmosphere, These include oceans, animal (and human) and plant respiration, decomposition of the organic matter, the forest fires, & emissions from volcanic eruptions.

The industrial plants that produce hydrogen or ammonia from natural gas, coal, or large-volume fermentation operations where plant products are made into ethanol, are some of the largest commercial producers of carbon dioxide gas.

The importance and uses of carbon dioxide gas

The properties of carbon dioxide gas