It begins in the tissues of your pancreas, The pancreas is the organ in your abdomen which lies behind the lower part of the stomach, It secretes the enzymes which help in the digestion and the hormones that help to regulate the metabolism of sugars.

The pancreas has endocrine and exocrine functions, It produces the digestive juices and the hormones which regulate the blood sugar, The pancreatic cancer is highly lethal because it grows and spreads rapidly and it is diagnosed in its late stages, and it is the disease in which malignant (cancerous) cells form in the tissues of the pancreas. 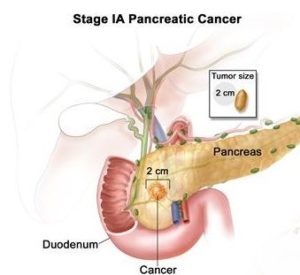 Pancreatic cancer spreads rapidly and it is seldom detected in the early stages which is the main reason why it is a leading cause of the cancer death, The signs and symptoms may not appear until the pancreatic cancer is advanced and the complete surgical removal is not possible.

Pancreatic cancer does not cause symptoms until it has grown, so it is mostly diagnosed in the advanced stages rather than early in the course of the disease, Painless  jaundice (It is the yellowish discoloration of the skin and whites of the eyes) without the pain can be the early sign of the pancreatic cancer.

The other symptoms that can occur with a more advanced disease are nausea, vomiting, the unexplained weight loss, the itching skin, the back pain, dark urine, and the enlarged lymph nodes in the neck can be present as well.

Pancreatic cancer causes symptoms such as the pain in the upper or middle abdomen, the abdominal bloating, diarrhea, the fatigue, depression, light-colored stools, and the loss of appetite.

Pancreatic cancer is difficult to diagnose, and the diagnosis is made late in the course of the disease, The pancreatic cancer is usually diagnosed by a combination of the medical imaging techniques such as the ultrasound or the computed tomography, the blood tests, and the examination of tissue samples (biopsy).

The only curative treatment is the surgical removal of all cancer and the pancreatic transplant, Many patients are not eligible for the pancreas transplant, The chemotherapy for the metastatic pancreatic cancer can extend the life and improve the quality of life as it is made after the surgery, and it can lower the chances of cancer returning.