They are organic chemical substances that synthesized inside the endocrine glands and secreted directly into the blood which transports them to another organ, where they affect on the functions, growth & source of nutrition of this organ.

Hormones are secreted in a small define amounts to perform their functions perfectly, where any increase or decrease in the amount of secretion of any hormone leads to a disturbance in the function of body organs and results in pathological changes and symptoms that are characteristic for each hormone, Most of the effects of hormones are in the form of stimulation, where it stimulates organs or other glands.

Plants have no special glands to secrete hormones as in animals, but the hormones of plants (auxins) are secreted by special plant cells, Boyson Jensen in 1913 was considered as the first scientist who referred to the auxins (plant hormones) and explained their role in phototropism of a growing point (stem).

He proved that the tip of coleoptile (receptor site) secretes a chemical substance “indole acetic acid” which is transmitted to the responding site (the site of curvature), causing its bend.

Starling: In 1905, He found that the pancreas secretes the pancreatic juice directly after the arrival of food from the stomach to the duodenum, even after the cutting of nerve supply between the pancreas and the other organs.

He concluded that there must be a non nervous stimulation, He discovered that the mucous membrane that lines the duodenum secretes a certain chemical substances (chemical messages) which pass into the bloodstream to stimulate the pancreas to secrete its pancreatic juice, He named these chemical messages by hormones (a Greek word which means activators).

The scientists were able to know the functions of hormones through:

Hormones are organic substances, where some of them are made up of complex proteins and others are made up of simple components such as amino acids or steroids (lipid derivatives), Hormones are secreted in very small amounts that estimated by micrograms (1/1000 milligram).

Types of glands in man

There are three types of glands that present in human body which are:

The human body contains a group of endocrine glands which are distributed in different places in the body and each of them has its own secretion that contains one hormone or a group of hormones: 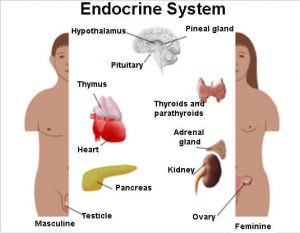 It is considered as the master gland because it controls the endocrine system through the hormones that secreted by it and affects on the functions and secretions of the most endocrine glands, It is located beneath the brain and connected with the hypothalamus.

The pituitary gland consists of two parts which are:

Hormones of the Adenohypophysis part

It controls the metabolism especially the protein synthesis, accordingly, it controls the physical growth of the body, The hypersecretion or hyposecretion of this hormone causes a disease that depends on the age of the patient:

In adults: Hypersecretion causes acromegaly case that is characterized by the increase of bone growth at the extremities (enlarged hands, feet and fingers) and enlargement of facial bones.

A group of hormones that affect on the activity and secretion of some of the other endocrine glands and includes:

Luteinizing hormone (LH): It stimulates the formation of corpus luteum in female, It responsible for the formation and secretion of the interstitial cells in testis in male, The hormones (FSH) and (LH) are important for the individual sexual maturity.

Hormones of the neurohypophysis part

The hormones of neurohypophysis part are secreted from the nerve cells that present in the hypothalamus of the brain which are called the neuro-secretory cells.

These secreted hormones reach the posterior lobe of the pituitary gland through the infundibulum and they include the following hormones:

There is a direct relation between this hormone and regulation of uterine contractions, where it increases them strongly during delivery (labour), so, gynecologists use this hormone to accelerate the birth of the baby by stimulating strong contractions of the uterine muscles, It stimulates the release of milk from mammary glands after the delivery process as a response to the lactation (milk letting hormone).