Hormones of the cortex

The cortex of adrenal gland secretes a group of hormones that known as steroids which can be divided into three groups as the following:

Glucocorticoids: They include cortisone hormone and corticosterone hormone, They regulate the carbohydrate (sugar – starch) metabolism in the body.

Mineralocorticoids: They include aldosterone hormone that plays an important role in maintaining the mineral balance in the body, as it increases the reabsorption of sodium and excretion of the excess potassium through the two kidneys.

Sex hormones: Although the main sources of sex hormones are the testes in male and ovaries in female, there are similar hormones that secreted from the adrenal gland cortex such as the male sex hormone testosterone and female sex hormones oestrogen and progesterone.

If there is an unbalance in the secretion of adrenal cortex sex hormones and the sex hormones that are secreted from the special glands, it leads to the muscularization in females, Feminization in males, Atrophy of gonads in both sexes (if there is a tumor in the cortex of adrenal glands). 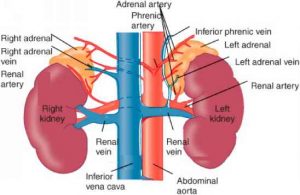 Hormones of the medulla

The medulla of the adrenal gland secretes two hormones which are adrenaline and noradrenaline that are known as emergency hormones, They are responsible for the vital activities occurring in the body when an individual is subjected to emergency situations such as fear, fight, excitation and during muscular exercises, as they:

The types of cells in islets of Langerhans

They are small in number and secrete glucagon hormone, It increases the sugar (glucose) level in the blood by increasing the breakdown of glycogen that is stored in the liver into glucose.

They represent the majority of islets of Langerhans cells and secrete insulin hormone, It decreases the glucose level in the blood by:

The decrease in insulin hormone secretion leads to a disease called Diabetes Mellitus that is characterized by a disturbance in the metabolism of carbohydrates (glucose) and lipids.

The sex glands (gonads) are:

Male sex hormones are called androgens and include two hormones which are Testosterone hormone and Androsterone hormone, They are secreted from the interstitial cells in testis.

Female sex hormones are called oestrogens and include three hormones which are: