B vitamins maintain good health and well-being, and they have a direct impact on your energy levels, brain function, and cell metabolism, B vitamins are important for those who are pregnant or breastfeeding, B vitamins help in fetal brain development, and they reduce the risk of birth defects.

Vitamin B complex is a supplement that delivers eight of the B vitamins: B1 (thiamin), B2 (riboflavin), B3 (niacin), B5 (pantothenic acid), B6 (pyridoxine), B7 (biotin), B9 (folate), and B12 (cobalamin). they can prevent infections and help support or promote: cell health, growth of red blood cells, energy levels, eyesight, brain function, digestion, appetite, proper nerve function, hormones and cholesterol production, cardiovascular health, and muscle tone.

Chemistry: Vitamin B6 consists of 3 closely related pyridine derivatives pyridoxine, pyridoxamine, and pyridoxal. All 3 have equal vitamin activity and are naturally occurring forms of vitamin B6. 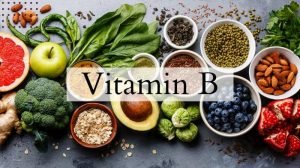 Functions of Vitamin B6

All forms of vitamin B6 are absorbed from the intestine. Most tissues contain the enzyme pyridoxal kinase which catalyzes the phosphorylation by ATP of all forms of the vitamin to their respective phosphate esters. Only pyridoxal phosphate and pyridoxamine phosphate are active as coenzymes. Pyridoxine coenzymes function in a large number of different enzymatic reactions, the most common types of these reactions are:

Deficiency of vitamin B6

Chemistry: It is a heterocyclic sulphur-containing vitamin, consisting of fused imidazole and thiophene rings.

The active form of biotin, biocytin, is formed by an enzyme called holocarboxylase synthase which binds biotin to a lysine residue in the carboxylase enzyme, Formation of biocytin is essential for a number of carboxylases that catalyze CO6-fixation or carboxylation, Examples of these biotin-dependent carboxylases:

Deficiency can be induced in animals by feeding them oral antibacterial drugs, thus reducing intestinal flora. Biotin deficiency has been produced in man by a low bootin diet containing large amounts of raw egg white, which contains heat-labile protein avidin, that binds biotin in a non digestible form preventing its absorption. The symptoms that occurred were: fine scaly desquamation of the skin, anaemia, anorexia and nauses.

Chemistry: It is 6,8-dithio-octanic acid, i.e. it is sulphur containing vitamin. It occurs in two interconvertible forms; an oxidized form with a cyclic disulfide and a reduced open chain form “dihydrolipoic acid” with two-SH groups at the 6th and 8th positions.

It is found in many biological materials including yeast, liver and red meat. Also, it is found in potatoes, beets, spinach, carrots and sweet potatoes.

I. Ascorbic acid is a hydrogen carrier acting as a cofactor for certain enzymatic reactions for example:

II. Ascorbic acid has other important properties as a reducing agent, which appear to be non-enzymatic, for example:

III. Ascorbic acid appears to be a biologically important antioxidant, reducing the risk of cancer when present in adequate amounts in the diet.

Severe deficiency results in a disease termed scurvy which is characterized by: