The single cycle of cardiac activity can be divided into two basic phases – diastole and systole, It is defined as a sequence of alternating contraction and relaxation of the atria and ventricles to pump the blood throughout the body, It starts at the beginning of one heartbeat and ends at the beginning of another.

Mechanical function of the heart can be described by the pressure, volume, and flow changes which occur within it during a single cardiac cycle, The cardiac cycle is defined as one complete sequence of contraction and relaxation, Cardiac cycle time is the time required for one complete cardiac cycle. Normal value: with a normal heart rate of 75 beats/min = 60/75= 0.8 second.

Phases of the cardiac cycle 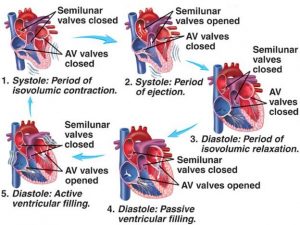 The ventricle has nearly reached its maximum or end-diastolic volume before an atrial contraction begins, the atrial contraction plays an increasingly significant role in the ventricular filling as the heart rate increases because the time interval between the beats for the passive filling becomes progressively shorter with increased heart rate.

Ventricular systole begins when the action potential passes through the AV node and sweeps over the ventricular muscle-an event represented by the QRS complex of the electrocardiogram, Contraction of ventricular muscle cells causes the intraventricular pressure to rise above that in the atrium, The increased pressure behind the leaflets in the ventricle causes the abrupt closure of the AV valve and hearing of the first heart sound.

The pressure in the left ventricle continues to rise sharply as the ventricular contraction intensifies, When the left ventricular pressure exceeds that in the aorta, the aortic valve passively opens, the period between the mitral valve closure and the aortic valve opening is referred to as the isovolumetric contraction phase because during this interval the ventricle is a closed chamber with a fixed volume

The ventricular ejection begins with the opening of the aortic valve, In early ejection, the blood enters the aorta rapidly and causes the pressure there to rise, the pressure builds up in both the ventricle and the aorta as the ventricular muscle cells continue to contract in early systole, This interval is often called the rapid ejection period.

Left ventricular & Aortic pressures ultimately reach the maximum called the peak systolic pressure, At this point, the strength of the ventricular muscle contraction begins to wane, Muscle shortening & ejection continue, but at a reduced rate, the aortic pressure begins to fall because the blood is leaving the aorta and large arteries faster than the blood is entering from the left ventricle.

Throughout the ejection, very small pressure differences exist between the left ventricle and the aorta because the aortic valve orifice is so large that it presents very little resistance to flow, Eventually, the strength of the ventricular contraction diminishes to the point where the intraventricular pressure falls below the aortic pressure, A dip, called the incisura or the dicrotic notch, appears in the aortic pressure trace because a small volume of the aortic blood must flow backward to fill the space behind the aortic valve leaflets as they close to start the next phase.

The ventricle has reached its minimum or end-systolic volume at the time of the aortic valve closure, After the aortic valve closure, the intraventricular pressure falls rapidly as the ventricular muscle relaxes. Indeed, the atrial pressure progressively rises because the blood continues to return to the heart and fill the atrium, Ultimately, the intraventricular pressure falls below the atrial pressure, and the AV valve opens.

The mitral valve passively opens when the left ventricular pressure falls below left atrial pressure and the period of ventricle filling begins, About 75% of the blood that had previously accumulated in the atrium behind the closed mitral valve empties rapidly into the ventricle, and this causes an initial drop in the atrial pressure. Later, the pressures in both chambers slowly rise together as the atrium and ventricle continue passively filling simultaneously the blood returning to the heart through the veins.

The ventricles continue to fill with the blood & expand, and they become less compliant and the intraventricular pressure rises, This reduces the pressure gradient across the AV valves so that the rate of filling falls, that is why the atrial systole has to start to begin the next heart cycle.

The aorta distends or balloons out during the systole because more blood enters the aorta than leaves it, During diastole, the arterial pressure is maintained by the elastic recoil of walls of the aorta and other large arteries. Nonetheless, the aortic pressure gradually falls during diastole as the aorta supplies blood to the systemic vascular beds.

The pressure pulsations that occur in the right atrium are transmitted in a retrograde fashion to the large veins near the heart, These pulsations, shown on the atrial pressure trace, can be visualized in the neck over the jugular veins in the recumbent individual, They are collectively referred to as the jugular venous pulse and the can provide clinically useful information about the heart.

Atrial contraction produces the first pressure peak called the ”a” wave, The ”c” wave, which follows shortly thereafter, coincides with the onset of the ventricular systole and it is caused by an initial bulging of the tricuspid valve into the right atrium, Right atrial pressure falls after the c wave ”x” wave, because of the atrial relaxation and a downward displacement of the tricuspid valve during the ventricular emptying.

Right atrial pressure then begins to increase toward the third peak, the ”v” wave, as the central veins and right atrium, fill behind the closed tricuspid valve with the blood returning to the heart from the peripheral organs, With the opening of the tricuspid valve at the conclusion of the ventricular systole, right atrial pressure again falls as the blood moves into the relaxed right ventricle ”y” wave.