The electrocardiograph is the instrument, which amplifies and records these electrical potentials on a moving paper strip. The normal ECG is composed of a P wave, a ”QRS complex”, and a T wave. The QRS complex is formed of 3 separate waves, the Q wave, the R wave, and the S wave.

In order to get a complete picture of the electrical activity of the various parts of the heart, the electrodes are placed at different positions of the body. The recording from these electrodes draws 12 leads on the ECG paper. There are two types of leads: Bipolar leads and unipolar leads.

In this type of leads, two active electrodes are used (i.e., bipolar recording), one of them is connected to the negative terminal of the electrocardiograph and the other one to the positive terminal. The electrodes are placed on the right arm, the left arm, and the left leg. There are 3 standard limb leads, which are called, lead I, II, and III, each record the differences in potential between two limbs. 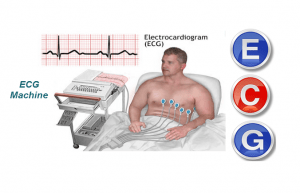 Three unipolar limb leads are recorded electrodes, which are placed in the (right arm) VR, (left arm) LV, and (left foot) VF. Augmented limb leads designated by the letter a (aVR, aVL, aVF). The augmented limb leads increase the size of potential by 50% without any change in configuration from the non-augmented record.

These are six unipolar leads, which the exploring electrodes are arranged on the front wall of the chest, over the heart or precordium. They are designed V1-V6:

The chest leads are arranged to view the heart in the horizontal (transverse) plane in V1 and V2, the QRS recordings of the normal heart are mainly negative because the chest electrode is nearer the base of the heart than the apex (to the right of the ventricular depolarization wave).

Analysis of the standard ECG

The P wave is produced by the spread of the depolarization wave from the SA node through the atria to the AV node (from the right to left) positive wave. It represents atrial depolarization. It starts at 0.02 sec. before contraction. The duration of the P wave is 0.1 sec, and its amplitude is 0.1-0.3mV.

Some abnormalities of the P wave

The QRS complex is produced by ventricular depolarization. It is composed of three waves.

Some abnormalities of the QRS complex

The T wave is due to the faster and stronger stage of ventricular repolarization. Repolarization of the ventricles starts soon after the end of the S wave but at a very slow rate and does not cause any waves until it becomes strong enough and produces the T wave.

The mean direction of the repolarization wave in the ventricles is opposite to that of the depolarization wave i.e., it spreads away from the recording electrode producing a positive T wave. This is because the ventricular muscle repolarizes from the outer to the inner surface, The duration of the T wave is 0.25 sec, and its amplitude is 0.2-0.3mV.

Some abnormalities of the T wave:

Atrial repolarization is not represented in the ECG because it is masked by the QRS complex. Sometimes an additional positive small ”U” wave is present after the T wave, which is believed to be due to slow repolarization of the papillary muscles.

It is the time between the beginnings of the P wave to the beginning of the R wave. Normally it is 0.12-0.2 sec, It represents the atrial depolarization and conduction through the AV node and AV bundle.

It lies between the end of the S wave and the beginning of the T wave. T wave. It represents the slow ventricular repolarization. It should be isoelectric. Pathologically it may be elevated or depressed.