Cardiac muscle is also called myocardium, in vertebrates, one of three major muscle types, found only in the heart. It is similar to skeletal muscle, it possesses contractile units known as sarcomeres; this feature, however, also distinguishes it from smooth muscle, Cardiac muscle differs from skeletal muscle in that it exhibits rhythmic contractions and is not under voluntary control.

Properties of the cardiac muscle 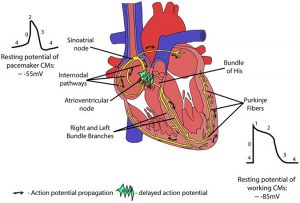 Automaticity is the ability of the cardiac muscle to beat at regular intervals by the pace maker cardiac cells to spontaneously depolarize and generate an action potential. Simultaneous activation of the whole cardiac muscle cells is achieved primarily by the conduction of action potentials from one cell to the next. This conduction occurs via the gap junctions that connect all cells of the heart into a functional syncytium (i.e., acting as one synchronous unit).

The heart is a myogenic organ; it does not need nerve stimulation to initiate its contraction. The heartbeat originates in the Sino-atrial node (SA node), which is located at the junction of the superior vena cava with the right atrium. It contains specialized cells, which discharge spontaneously and rapidly at a frequency of 60-100 per minute (automaticity or rhythmicity).

They are the most excitable among the myocardial cell (have less negative potential than the rest). They are spontaneously depolarized during the diastole causing what is called pre-potential or diastolic depolarization. Therefore, it is the normal cardiac pacemaker. Its rate of discharge determines the heart rate (HR).

Understanding the ionic basis of cardiac action potentials is important for understanding both cardiac physiology and the electrocardiogram (ECG), which is a recording of the currents produced by these ionic changes. In addition, antiarrhythmic drugs exert their effects by binding to the channels that produce these ionic currents.

The principal types of cardiac action potentials are the fast and slow types. The slow type occurs in the Sino-atrial (AS) node ”pacemaker potential” which is responsible for cardiac automaticity and in the Atrio-ventricular (AV) node. The fast type action potential occurs in myocytes and Purkinje cells.

Fast action potential (for myocardial cell) and its ionic basses.

Phase 0: The resting membrane potential (RMP) (mV) across the myocardial cell membrane is about – 90 mV. When an electrical stimulus excites the ventricular cell, the cell membrane rapidly depolarizes and the potential difference reverses (positive overshoot), such that the potential of the interior of the cell exceeded that of the exterior by about 20 mV. The rapid upstroke of the action potential due to rapid Na+ influx by voltage-gated Na+ channels and the heart cell is no longer excitable. (depolarized)

Phase 1: Immediately after the upstroke, there is a brief period of partial repolarization, (rapid repolarization which is caused by a brief efflux of K+ from the cell.

(Phase 4): Is the interval from the end of repolarization until the beginning of the next action potential.

The excess Na+ that entered the cell rapidly during phase 0 and more slowly throughout the action potential is removed from the cell by the action of the enzyme Na+/K+-ATPase. Similarly, most of the excess Ca2+ that had entered the cell during phase 2 is eliminated by a Na+/Ca2+ exchange, which exchanges three Na+ for one Ca2+. However, a small fraction of the Ca2+ is eliminated by adenosine triphosphate (ATP)-driven Ca2+ pump.

Cells within the sinoatrial (SA) node are the primary pacemaker site within the heart. These cells are characterized by having no resting potential but instead generate regular, spontaneous action potentials. The depolarizing current is carried into these cells primarily through relatively slow Ca2+ channels instead of by fast Na+ channels.

As the membrane potential reaches about − 50 mV, another type of channel opens. This channel is called a transient or T-type Ca2+ channel. As Ca2+ enters the cell, it furtherly depolarized leading to decline in the outward movement of K+.

Relation between electrical and mechanical responses of the cardiac muscle

The whole contraction and part of the relaxation in which the heart is refractory (can not be stimulated) coincide with phases 0, 1, 2, and part of phase 3. During these phases, the heart is in the Absolute Refractory Period (ARP). The long action potential duration with its long ARP ensures that tetanus cannot be induced in the heart.