Cardiovascular regulatory mechanisms increase the blood supply to active tissues, they help increase or decrease the heat loss from the body by redistributing the blood in humans and other mammals, they can maintain the blood flow to the heart and brain when the body suffers from hemorrhage, When the hemorrhage faced is severe, flow to these vital organs is maintained at the expense of the circulation to the rest of the body.

Nerve supply to the heart

The SA node is usually under the influence of both divisions of the autonomic nervous system The sympathetic system enhances automaticity, whereas the parasympathetic system inhibits it. Ordinarily, the vagal tone predominates in healthy resting individuals.

Innervation of the blood vessel

Although the arterioles are most densely innervated, all blood vessels except capillaries and venules contain smooth muscle and receive motor nerve fibers from the sympathetic nervous system.

One of the major sources of excitatory input to the sympathetic nerves controlling the cardiovascular system is a group of neurons located in the rostral ventrolateral medulla (RVLM). This region is called the vasomotor area. The Nucleus of tractus solitarius (NTS) is also a major site of origin of excitatory input to cardiac preganglionic parasympathetic neurons in the nucleus ambiguous.

1. Afferent impulses from receptors located within the cardiovascular system 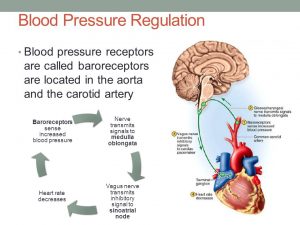 The baroreceptors are more sensitive to the pulsatile pressure than to constant pressure, At normal blood pressure levels (about 100 mm Hg mean pressure), a burst of action potentials is transmitted from the baroreceptor to stimulate the cardiac vagal neurons that decrease heart rate (vagal tone), At lower mean pressures, the firing is reduced while at higher pressures, the firing is increased.

Afferents from the baroreceptors are called ”buffer nerves” (”aortic depressor nerve” a branch of the vagus nerve from the aortic arch and ”carotid sinus nerve” a branch of the glossopharyngeal nerve from the carotid sinus), They make connections to the medullary cardiovascular areas, and the efferent pathways from these areas constitute a reflex feedback mechanism that operates to stabilize blood pressure and heart rate.

The activation of arterial baroreceptors inhibits the secretion of Anti Diuretic Hormone (ADH), Baroreceptors are very important in the short-term control of arterial pressure, Activation of the reflex allows for rapid adjustments in blood pressure in response to the abrupt changes in the posture, blood volume, cardiac output, or peripheral resistance, The baroreceptors are more sensitive to pulsatile pressure than to constant pressure.

In chronic hypertension, the baroreceptor reflex mechanism is reset to maintain an elevated rather than the normal blood pressure.

The mechanoreceptors embedded in the walls of the heart (all chambers), great veins where they empty into the right atrium, and the pulmonary artery, There are two types of the atrial receptors:

Their rate of discharge increases when there is an increase in the blood volume or the venous return. These receptors are called low-pressure receptors. They are pressure as well as volume controllers.

2. Afferent impulses from receptors within the body but outside the cardiovascular system

a. Reflex response to pain

The pain usually causes a rise in blood pressure and tachycardia via afferent impulses in the reticular formation converging in the RVLM. However, prolonged severe pain may cause vasodilation, bradycardia, and fainting.

b. Reflexes from receptors in exercising skeletal muscle

The reflex tachycardia and increased arterial pressure can be elicited by the stimulation of certain afferent fibers from the skeletal muscle, These pathways may be activated via a pathway to the RVLM.

a. The cerebral cortex, limbic system, and hypothalamus

The vasomotor area is regulated by the descending tracts from the cerebral cortex (particularly the limbic cortex) that relay in the hypothalamus, These fibers are responsible for the blood pressure rise and tachycardia produced by the emotions such as stress and anger, The connections between the hypothalamus and the vasomotor area are reciprocal, with the afferents from the brain stem closing the loop.

When the intracranial pressure is increased, the blood supply to RVLM neurons is compromised, and the local hypoxia and hypercapnia increase their discharge. This results in rising in the systemic arterial pressure (Cushing reflex) that tends to restore.

In cases of severe reduction of arterial BP, brain ischemia occurs. The resulting low blood flow causes buildup of carbon dioxide in the vasomotor centers (RVLM), resulting in generalized vasoconstriction. This elevates the arterial BP and maintains the blood flow.

CNS ischemic response does not become very active until the arterial BP falls far below normal (60 mm Hg or less). It reaches maximum stimulation at pressure 15-20 mm Hg, This response is an emergency control system that acts rapidly and powerfully to prevent further decline in the arterial pressure when blood flow to the brain decreases dangerously; it is sometimes called the “last-ditch stand” mechanism for blood pressure control.

Heart rate and its regulation

In adult males the normal heart rate is about 75 per minute, the range is from 60-100 per minute. In adult females, the heart rate is slightly higher than in males of similar age; this may be due to lower vagal tone as a result of lower blood pressure in females.

Since the heart rate is regulated by variations in the vagus tone and sympathetic discharge.

Heart rate is accelerated by:

Heart rate is slowed by: