The conducting system offers the heart its automatic rhythmic beat, It transmits signals generated by the sinoatrial node to cause contraction of the heart muscle. It consists of cardiac muscle cells and conducting fibers (not nervous tissue) that are specialized for initiating impulses and conducting them rapidly through the heart.

Conductivity is the ability of a cardiac muscle to transmit the cardiac impulses that originated in SAN to all parts of the heart.

Because cells are electrically coupled via gap junctions, excitation to the threshold of one cell typically results in the spread of this action potential throughout the heart. In the normal heart, the SA node is the pacemaker because it has the highest intrinsic rhythm. Below is the normal conduction pathway for the heart.

HR is normally controlled by the electrical activity of the SA nodal cells, the rest of the conduction system ensures that all the rest of the heart activated along in proper sequences for efficient pumping action, All cardiac tissue conducts the electrical impulses, but the following are particularly specialized for this function. 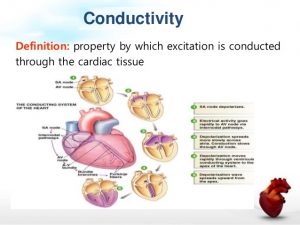 Conduction system of the heart steps

Cardiac excitability is the ability of the cardiac muscle to respond to the adequate stimulus by contraction.

All or none rule

Because of the syncytial nature of cardiac muscle, stimulation of any single atrial muscle fiber causes the action potential to travel over the entire atrial mass; similarly, stimulation of any single ventricular fiber induces excitation of the ventricular muscle mass. That is why each cardiac muscle sheet (atrial or ventricular) behaves as a functional syncytium and obeys the ” all or none rule” like a single skeletal muscle fiber.

Like other muscles, the cardiac muscle is excited by adequate stimuli and responds by generating an action potential followed by contraction. The general features of the excitability of the heart are like those described for nerve and voluntary muscle, but there are certain differences, which are of fundamental significance in relation to the function of the heart.

This mechanism prevents sustained, tetanic contraction of cardiac muscle, Indeed, it gives time for myocardial relaxation, sufficient to permit the cardiac ventricles to fill with venous blood, this is as essential to the normal pumping action of the heart as is a strong cardiac contraction.

During this period, the heart cell begins to respond again to excitation. However, the stimulus must be higher than normal. Application of a supra-threshold stimulus to a region of normal myocardium during late phase 3 evokes an action potential.

Throughout the remainder of phase 3 and 4, the cardiac cell completes its recovery from inactivation to start responding to a normal stimulus that originates from the SAN.

The major event in myocardial contraction is a dramatic rise in the intracellular calcium Ca2+ level. In resting muscle, attachment of the actin and myosin heads to produce contraction is inhibited by troponin and tropomysin (a relaxing protein complex). Increased intracellular calcium level interacts with troponin C to remove the inhibition of the actin site on the thin filaments.

When the wave of depolarization passes over the muscle cell and down the T-tubules, Ca2+ is released from the sarcoplasmic reticulum (SR) into the intracellular fluid. In addition, the Ca2+ entry via the L-type Ca2+ channels triggers the release of calcium stored in the SR (calcium-induced calcium release).

During contraction, cross brides occur when thin and thick filaments slide past one another to shorten each sarcomere, the bridges form when the myosin heads from the thick filaments attach to the actin molecules in the thin filaments, there are two processes that participate in the reduction of intracellular Ca2+ that terminates the contraction:

Preload: Frank-Starling law of the heart ”auto-regulation of cardiac pumping”

The law states that: within physiological limits, the tension develops in cardiac muscle is directly proportionate with the initial length of its fibers, or in other words to the end-diastolic volume (preload).

Another way to express this law is ”within physiological limits, the heart pumps all the excess blood that comes to it without allowing excessive stasis of blood in the veins”. This intrinsic ability of the heart to adapt itself to changing blood volume returned to the heart is the basis of autoregulation of cardiac pumping.

Afterload is defined as the ”load” that the heart must eject blood against arterial pressure. Afterload is increased in 3 main situations: