The brain extracts approximately 50 % of oxygen and 10% of glucose from the arterial blood. The metabolic patterns of the brain differ from muscle, adipose tissue, kidney, and liver in its use of fuels to meet its energy needs:

Metabolism of the brain

1. Glucose is the only fuel for the human brain, except during prolonged starvation, The brain has a low fuel store and hence requires a continuous supply of glucose, It consumes about 120 g daily, accounting for about 60% of the utilization of glucose by the whole body in the resting state.

Most brain energy brain (60 % to 70 %), is used to power the transport mechanisms that maintain the Na+K+ membrane potential required for the transmission of the Nerve impulses, The brain must also synthesize the neurotransmitters and their receptors to propagate the nerve impulses.

Glucose is transported into brain cells by the glucose transporter GLUT3, This transporter has a low value of KM for glucose, which means that it is saturated under most conditions, so, the brain is provided with a constant supply of glucose.

2. Fatty acids do not serve as fuel for the brain; because they are bound to albumin in plasma and so do not traverse the blood-brain barrier.

In starvation, ketone bodies generated by the liver partly replace glucose as fuel for the brain, Although the neurons of the brain cannot directly use free fatty acids or lipids from the blood as fuels, they can, when necessary, use β-hydroxybutyrate (a ketone body), which is formed from fatty acids in the liver.

The capacity of the brain to oxidize β-hydroxybutyrate to acetyl-CoA becomes important during prolonged fasting or starvation, after liver glycogen has been depleted because it allows the brain to use body fat as an energy source, This spares muscle proteins until they become the brain’s ultimate source of glucose (via gluconeogenesis in the liver) during severe starvation.

Low blood glucose triggers the release of glucagon, which stimulates glucose release from the liver glycogen and shifts fuel metabolism in the liver and muscle to fatty acid oxidation, sparing glucose for use by the brain, In prolonged fasting triacylglycerols become the principal fuel; the liver converts the fatty acids to ketone bodies for export to other tissues, including the brain. 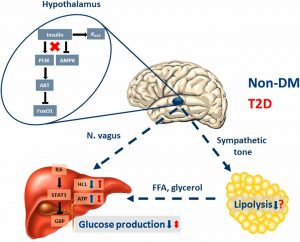 Metabolism of the brain

Metabolism of glutamate in the brain

High levels of NH4+ also, lead to increased levels of glutamine, which acts as an osmotically active solute (osmolyte) in brain astrocytes, the cells of the nervous system that provide nutrients, support, and insulation for neurons, This triggers an uptake of water into the astrocytes, leading to their swelling.

Depletion of glutamate in the glutamine synthetase reaction may have additional effects on the brain, Glutamate and its derivative δ-aminobutyrate (GABA) are important neurotransmitters; the sensitivity of the brain to ammonia may reflect a depletion of neurotransmitters as well as changes in cellular osmotic balance.

The cerebrospinal fluid is a clear, plasma-like fluid that circulates around the outside of the brain, in the brain ventricles, and in the space surrounding the spinal cord.

The volume of spinal fluid in an adult is approximately 150 ml. Daily secretion is about 750 ml/day. This indicates a rapid turnover for its secretion and absorption.

Most cerebrospinal fluid originates by active secretion from the cell of the choroid plexus. The remaining CSF, about %30, is formed in other sites such as the subarachnoid space and the ependymal lining of the ventricles.

Functions of the CSF

The secretory process is selective and a blood CSF barrier exists for many substances including drugs, So that, their concentration in the CSF is lower than that of the plasma, Other substances (chloride/folate) are present in higher concentrations.

These differences may be less marked if the blood-CSF barrier is impaired as in inflammatory states. But, substances such as chloride and glucose change in a similar pattern as any changes that take place in plasma concentration.

the composition of CSF has some similarities to plasma However, ranges of many substances are different for CSF than they are for plasma, e.g. the protein level of normal CSF is dramatically lower than that of plasma.

In addition to the chemical components, a few cells are also found in normal CSF, In an adult, 0-5 WBC/μLs is considered normal, Children will have slightly higher cell counts; up to 30 WBC/μLs is within normal limits for newborns, Lymphocytes account for 60-100 of these cells.

Some pathological changes in CSF