The complement system is a complex group of serum proteins, present in low concentration in normal serum, that interact with each other in a cascading fashion to protect against infectious agents. Membrane-bound proteins are also included in the complement system.

Synthesis of the complement system

The complement components are designated by the letter “C” followed by a number, which is related to the order of its discovery e.g. C1. C2, C3 … etc. On cleavage of a complement component, the large fragment is given the suffix “b” e. g. C5b and the smaller fragment is given the suffix “a” e.g. C5a. Components of the alternative pathway are designated with a capital letter e.g. factor B. factor D etc…

The activation of complement components takes place in a sequential fashion, each component activating its successor protein in the cascade, Many components are pro-enzymes that must be cleaved to form active enzymes, There are three complement pathways: classical, alternative, and lectin.

Complement pathways lead to the formation of a complex enzyme (C3 convertase) capable of binding and cleaving a key protein C3, common to pathways. C3 activation is the common central event. After that, the three pathways proceed in the same fashion together through the binding of the late-acting components to form a membrane-attack complex (MAC) which is C5b6789 which becomes inserted in the lipid bilayers of foreign membranes, ultimately causing cell lysis.

The classical pathway is typically initiated by Ag-Ab complexes, in solution or on the surface of a cell thus it is triggered after the generation of specific Ab to a particular Ag. On the other hand, the activation of the alternative pathway occurs by the microbial surfaces and it can proceed in the absence of Ab. 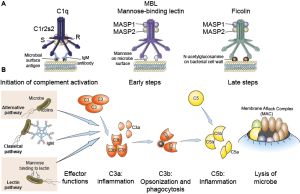 Biologic Functions of the Complement System

1 Cell Jysis: Insertion of the membrane attack complex (C5b6789) into the cell membrane leads to the lysis of many types of cells, including bacteria, tumour cells, erythrocytes, protozoa, and enveloped viruses

2 Opsonization: Cells, antigen-antibody complexes, and other particles are phagocytosed much more efficiently in the presence of C3b bound on their surfaces, because of the presence of C3b receptors on the surface of many phagocytes e.g. monocytes, macrophages, neutrophils…. etc.

3 Inflammatory function: ie. the generation of peptide fragments that regulate the features of the inflammatory and immune response:

Regulation of the Complement System

Transplantation is the practice of grafting tissues or organs from one person to another or from one place to another in the same person. The main problem in transplantation between genetically non-identical persons is graft rejection, This is due to the presence of tissue antigens that differ from one individual to another and stimulate the immune response which causes the rejection.

Regions B, C and A determine the antigenic specificities of class I MHC surface molecules, Region D determines the antigenic specificities of class II MHC surface molecules. The region between D and B codes for certain complement components (C2, C4, factor B), and is not concerned with graft rejection. It is called class III MHC.

Class I MHC-antigens: are glycoproteins and include HLA-A, HLA-B, and HLA-C. They are found on all nucleated cells. Class I MHC enables cytotoxic T cells (Tc) to recognize foreign antigen on the surface of graft cells, tumour cells or virus infected cells and kill these cells. In other words, Tc cells (CDB) are triggered only when they recognize both antigen and class I MHC molecules in close association on the surface of target cells. This is known as MHC restriction.

Class II MHC-antigens: or HLA-D antigens are glycoproteins, and include HLA- DP, HLA- DQ and HLA-DR. These are found chiefly on antigen presenting cells (APCS) such as monocytes, macrophages, dendritic cells in lymph nodes, Langerhans cells in skin and B lymphocytes.

Helper T cells (Th) (CD4) will recognize foreign antigen on the surface of APC only if they are associated with class II MHC molecules (MHC restriction). The HLA system is extremely polymorphic, having multiple alternative forms or alleles of the gene at each known locus e.g. HLA A1, A2, A3….. etc. Both classes could be typed by: Flow cytometry or molecular techniques such as PCR.

3. Disease association. It is found that the presence of certain HLA antigens is often associated with a particular disease::

4. Paternity testing and forensic investigations (An individual inherits one maternal and one paternal chromosome 6).