Portal venous system can drain blood from the gastrointestinal tract (apart from the lower section of the rectum), spleen, pancreas, and gallbladder to the liver, It is formed from the 4th to the 12th gestation week, developing from the vitelline venous system in close relation with the umbilical venous system.

Origin: It is formed by the union of the superior mesenteric and splenic veins behind the neck of the pancreas and in front of IVC.

Course & relations: It ascends behind the 1st part of the duodenum and in front of IVC, then in the free border of the lesser omentum with both the hepatic artery (left) and bile duct (right) anterior to it, It is separated from IVC by the epiploic foramen, Then it terminates in the porta hepatis where it divides into right and left branches.

The inferior mesenteric vein terminates in the splenic vein. 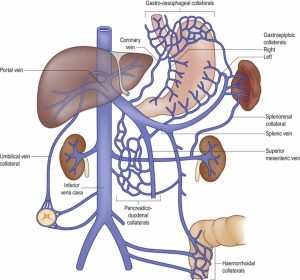 Histological structure of the liver

The liver is the largest gland and the main metabolic organ of the body. Unlike the pancreas in which the mixed exocrine-endocrine function is carried out by two distinct components, the dual function of the liver resides in the same cell, the hepatocyte.

Histological organization of the liver

It is a compound tubular gland with unique histological organization and microvasculature, constructed of the following:

I- The hepatic stroma

The liver is surrounded by a thin connective tissue Glisson’s capsule which is partially covered by mesothelium. The capsule becomes thicker at the hilum (porta hepatis), where the connective tissue septa arise and the portal vein and hepatic artery enter the liver, while the right and left hepatic ducts and lymph vessels exit.

The connective tissue of interlobar septa is not apparent in the human liver but is evident in the liver of the pig. Network of reticular fibers that support the hepatocytes and the blood sinusoids.

The parenchyma of the liver consists of anastomosing cords of hepatocytes arranged in the form of plates of cells radiating from a small central vein. These hepatic cords enclose between them narrow bile canaliculi and are separated from each other by blood sinusoids.

The liver has a double blood supply, receiving oxygenated blood from the general circulation via the hepatic artery (25%) and a large amount of poorly-oxygenated blood but rich in nutrients coming from the intestinal tract via the portal vein (75%).

On entering the porta hepatis the portal vein and the hepatic artery branch repeatedly and give off interlobular branches, running in the portal canals between the hepatic lobules, they pour their mixed blood into the hepatic sinusoids.

The hepatic blood sinusoids carry a mixture of arterial and portal venous blood, where blood is directed to the center of the classic hepatic lobule to drain into the central vein. Central veins from each lobule converge into larger veins and eventually form the hepatic veins to end in the inferior vena cava.

Hepatic blood sinusoids form an anastomosing plexus between the cords of hepatocytes, presenting an enormous surface area for the exchange of metabolites between the blood and the hepatic parenchyma. The hepatic sinusoid is lined by two types of cells:

IV- The space of Disse

Contents of space of Disse

Clinical hint: In chronic inflammation of the liver, hepatic stellate cells differentiate into myofibroblasts and deposit collagen type I in the perisinusoidal space causing liver fibrosis.

The hepatocytes continuously synthesize and secrete bile that is poured into the bile canaliculi. These are lined by the cell membrane of adjacent hepatocytes. The bile canaliculi form a complex anastomosing network of channels that direct the bile towards the periphery of the hepatic lobules into the short canals of Hering lined by cuboidal cells.

Bile flows from the canals of Hering to end in the interlobular bile ducts in the portal canals. Bile ducts are lined by cuboidal then columnar epithelium. Bile ducts gradually enlarge and fuse forming the right and the left hepatic ducts.

Clinical hint: Experimental models on hepatic injury refer to the role of the cells lining the canals of Hering as hepatic stem cells capable of proliferation, differentiation, and liver regeneration.

Three different classifications of liver lobules are described which refer to different aspects of hepatocyte activity, these are:

It is a hexagonal mass of hepatocytes radiating around a central vein into which the sinusoids of this area drain. In the classic hepatic lobule, blood and bile flow in opposite directions; the blood flows towards the central vein whereas the bile flows away from the central vein. The portal canals are located at the corners of the lobule, formed of a small triangular area of connective tissue and enclosing the portal triad, containing:

This is a triangular mass of hepatocytes from three adjacent classic hepatic lobules. It has at its center a portal canal and at each of its three angles a central vein. Each portal lobule drains its bile into the centrally-located bile duct.

This is the functional unit of the liver. It is a diamond-shaped mass of hepatocytes from two adjacent classic hepatic lobules. It has a central vascular core formed of branches from the portal vein and hepatic artery lying along the border between two classic lobules. The liver acinus can be subdivided into three zones according to their blood supply: