The stomach store and macerate food, and begin the early phases of food digestion, It is a bag-like muscular organ found on the upper abdomen’s left side, The esophagus delivers food to the stomach through a valve called the esophageal sphincter, It produces acid and enzymes that aid in the digestion of meals.

Histological structure of the stomach

The stomach is the most dilated segment of the digestive tube.

General histological features of the stomach

The mucosa and the submucosa of the empty stomach display longitudinal folds, the gastric rugae which disappear in the distended state, Rugae permit expansion of the stomach when it is filled with food and gastric juices. The mucosal surface of the stomach is lined by the surface mucous cells and is invaginated into the lamina propria forming the funnel-shaped gastric pits. The lamina propria contains a large number of branched, tubular gastric glands that open into the bottoms of the gastric pits. 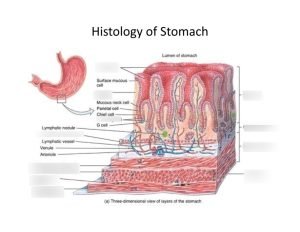 Histological structure of the stomach

From the histological point of view, the stomach is divided into 3 regions:

I- Mucosa of fundic region of the stomach

The Mucosa of fundic region is characterized by short and narrow gastric pits. Fundio mucosa is formed of:

2- The lamina propria: it is almost occupied by a large number of fundic glands that secrete the main bulk of gastric juice. The glands are surrounded by a little amount of highly vascular, loose connective tissue.

3- Muscularis mucosae: in all gastric regions, it is formed of inner circular and outer longitudinal layers of smooth muscle fibers.

The fundic glands of the stomach

They are closely-packed simple branched tubular glands, extending throughout the full thickness of the mucosa, perpendicular to the muscularis mucosae.

1. The mucous neck cells: they are low columnar present in the superficial (upper) part of the fundic gland. They secrete soluble mucus to lubricate the gastric content.

3. The peptic cells (chief cells, zymogenic cells): they are the most numerous cells in the fundic gland, present mainly in the base of the gland. They are pyramidal cells with a strongly basal basophilic cytoplasm (due to abundant rER) and apical eosinophilic zymogen secretory granules. They secrete pepsin and gastric lipase.

5. Stem cells: they are present mainly in the upper part of the fundic gland. They are low columnar cells usually seen in mitosis. They proliferate and move either superficially to differentiate and replace the surface mucous cells; or deeply where they differentiate into all types of secretory cells lining the gastric glands.

II. Mucosa of cardiac region of the stomach

The cardia is a narrow region of the stomach that surrounds the esophageal orifice. Its mucosa has the following histological features:

III. Mucosa of pyloric region of the stomach

It is characterized by: Wide and deep gastric pits occupying more than half the lengths of the mucosa. The lamina propria contains the branched, coiled, tubular pyloric glands which are lined by mucus-secreting cells and some enteroendocrine cells, particularly G cells secreting gastrin hormone.

It is formed of spirally-oriented smooth muscle fibers, arranged in inner oblique, middle circular, and outer longitudinal layers. The arrangement of muscle layers is related to its role in mixing gastric chyme during the digestive process. In the region of the pylorus, the circular smooth muscle layer is thickened constituting the pyloric sphincter.

Gastric serosa: the entire stomach is invested by serosa.