The pharynx is a musculo-membranous tube that extends behind the nasal cavities, the mouth, and the larynx. The mucous membrane of the pharynx differs in its lining epithelium from one part to the other.

Accordingly, Pharynx is divided into:

The lamina propria contains seromucous glands and is formed of dense fibroelastic connective tissue separating the epithelium from the striated muscles of the pharynx.

On cross-section, the wall of the gut is formed of four basic histological layers. From the lumen outward, they are: 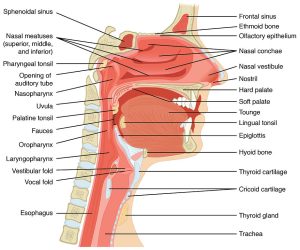 It is the most variable layer, composed of:

It is also called Muscularis externa, it consists of Spirally-arranged smooth muscle fibers that are usually organized in an inner circular layer and an outer longitudinal layer. Musculosa creates a series of peristaltic waves which move the food within the lumen of the gut. The myenteric autonomic nerve plexus (Auerbach’s plexus) is situated in the thin connective tissue found in between the two layers of the smooth muscle fibers.

A thin layer composed of: Loose connective tissue traversed by large blood and lymph vessels and nerve trunks. Sometimes contains a large amount of adipose tissue. The mesothelial covering of simple squamous epithelium (visceral peritoneum). Serosa provides a smooth surface covering the viscera to facilitate their free movement. When the peritoneum is not covering the viscus, this layer is called Aventitia (Fibrosa) which protects the viscera and fixes them to the thoracic, abdominal, and pelvic walls.

The histological structure of esophagus

The esophagus is a muscular organ responsible for the transport of the masticated food bolus from the mouth down to the stomach. Its greatest part lies in the thorax except for the terminal ½ inch which passes through the diaphragm to lie in the abdominal cavity.

Histological structure of T.S of the esophageal wall

1- The surface epithelium: non-keratinized stratified squamous epithelium which is suitable in this site as:

2- The lamina propria: formed of:

The mucosal esophageal glands that are:

3- The muscular is mucosae: represented by scattered bundles of longitudinal smooth-muscle fibers. In the lower part of the esophagus, this layer becomes more differentiated into inner circular and outer longitudinal smooth muscle layers.

It is formed of loose areolar connective tissue, The abdominal part of esophagus is covered by Serosa.

Physiology of the esophagus

The oesophagus is a muscular tube about 25cm long.

Function of the esophagus

A third complementary function is secretion. Oesophageal secretions are mucoid in nature to facilitate swallowing. The mucus in the upper part of the oesophagus prevents excoriation of the mucosa by food, and in the lower part protects the oesophageal wall from digestion by gastric reflux into the esophagus.

The anti-reflux function is mainly mediated by the lower oesophageal sphincter, also known as the gastroesophageal or cardiac sphincter. It is the lowest 3-5 cm of the esophagus. This sphincter is tonically contracted between meals to prevent reflux of gastric contents into the esophagus. It relaxes when a bolus of food reaches it during swallowing, but there is a delay of 2-3 seconds at this area before food enters the stomach. So, this area is particularly vulnerable to damage and ulceration by hot, cold or irritant food.

Types of normal peristaltic contractions in the oesophagus

These contractions sweep the body of the esophagus from above downwards in response to the act of swallowing and start even before the food reaches the esophagus. They start at the upper end of the esophagus as a continuation of the pharyngeal peristalsis. They travel along the whole length of the esophagus in about 9 seconds (3cm/s).

In the upright position, the bolus of the food usually travels along the esophagus faster than the primary peristaltic wave (4cm/s) because of the effect of gravity and reaches the lower end of the esophagus in about 7 seconds.

They occur in response to distension of the body of the oesophagus by an ingested bolus or a gastro-oesophageal refluxate. They have a clearing function that empties the oesophageal from food and fluid residues as well as from the normal gastric refluxate. During eating and drinking, both types of peristalsis occur and complement each other.

This type of peristalsis does not necessarily involve the whole oesophagus: it spares the part proximal to the site of distension. If the primary peristaltic wave fails to propel the food down in the esophagus, a secondary peristaltic wave starts at the site of the bolus and propagates down. Secondary waves are repeated until the bolus is driven down into the stomach.

Deglutition is the transfer of food from the mouth to the stomach, Various groups of muscles, striated and plain, take part in this highly coordinated action, The start of deglutition is voluntary, but it is completed by reflex actions, The deglutition center is in the medulla oblongata.

Speed of swallowing depends on the consistency of food, Fluids reach the stomach very rapidly (in about 6 seconds), since they traverse oesophagus faster than the oesophageal peristaltic waves, This is due to gravity in the erect posture, but they remain above the cardiac sphincter until a peristaltic wave opens this sphincter whereby the fluid enters the stomach, Semisolids take a longer time than fluids and solid materials are slower than semisolids.

Deglutition is divided into 3 phases to facilitate its description but really once the first phase is started the others follow without an interval in between.

Food in the mouth is “voluntarily squeezed or rolled posteriorly into the pharynx by the pressure of the tongue upward and backward against the palate.

It is an involuntary reflex and starts by the passage of food through the pharynx, It is a very rapid phase which takes about 1-2 seconds, The constrictor muscles of the pharynx contract, with receptive relaxation of the upper oesophageal sphincter, The posterior pillars of the fauces approximate to shut off the mouth cavity from the Pharynx and prevent the back passage of food to it.

Important protective reflexes take place to prevent the passage of food into the respiratory openings:

In this involuntary phase, food passes along the oesophagus to the stomach by Oesophageal peristaltic contractions, The movements in the upper third of the oesophagus are rapid while those in the lower third are slow, because the muscles of the upper third are striated and supplied by the vagus nerve while in its lower third are plain and depend on the local plexus of Auerbach, The middle third contains both types of muscles, This phase is helped by mucin and gravity in the erect position.

The reflexes of the involuntary phases are mediated by: