Emptying of the gastric contents is promoted by antral peristalsis waves and prevented by resistance of the pylorus. Antral peristaltic waves provide a pumping action, which is called the “pyloric pump”. Normally the force of tonic contraction of the pyloric sphincter is weak, leading to its incomplete closure and easy passage of fluids through it.

Feedback mechanisms from the duodenum are very important to slow down the rate of evacuation of the stomach when the small intestine is already filled. These mechanisms include:

When chyme enters the duodenum reflex inhibition of antral peristalsis associated with contraction of the pylorus occurs (enterogastric reflex) this is mediated in three ways; as a local enteric reflex, a prevertebral ganglionic and vago-vagal reflex, This is the most important factor in controlling the rate of emptying of the stomach, The most important stimuli for enterogastric reflex are the irritants and acids in the duodenal chyme, Acids are prevented from the release in the duodenum to allow time for neutralization by pancreatic and other secretions.

Gastric inhibitory peptide (GIF) is released from the upper small intestine in response to fat and to a lesser extent in response to carbohydrates, It inhibits gastric acid secretion and motility, Its main function is probably to stimulate the release of insulin from the pancreas after a meal.

Somatostatin is secreted in the enteric plexus of the GIT, It inhibits the secretion of gastrin and inhibits gastric emptying, Vasoactive intestinal peptide (VIP) mainly decreases HCI secretion and motility.

III) Some other factors which affect gastric emptying

It is the outward expulsion of the gastric contents (also intestinal contents), through the oesophagus, pharynx, and mouth, A large number of plain and voluntary muscles share in this complex act, It is preceded by a sense of nausea and profuse salivation from the buccal, pharyngeal, and esophageal mucosa.

The act of vomiting results from a squeezing effect of the abdominal muscles associated with the sudden opening of the oesophageal sphincters. This occurs via the following steps: 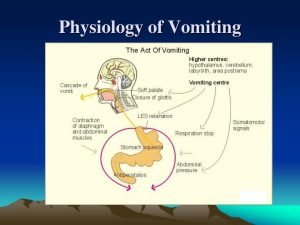 The causes of vomiting can be grouped into:

Any factor which affects the vomiting center, either by:

These substances may be:

Reflex stimulation of the center may occur by afferent impulses that arise from different parts of the body in addition to the irritation of the mucosa of the upper gastrointestinal tract, e.g. by mechanical stimulation of the posterior part of the tongue or drinking salty solution. Irritation of the following organs by inflammation. neoplastic growth or ulceration is associated with vomiting:

Vomiting occurs in psychic troubles (without any organic diseases) or by conditioned reflexes through visual, olfactory or gustatory stimuli: e.g. “nauseating smells” and “sickening sights.”